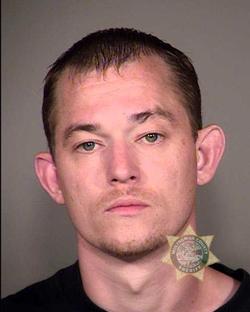 On Saturday, July 28, 2012, at 12:28 p.m., Portland Police officers assigned to East Precinct responded to a call of a shooting at Southeast Division and 122nd Avenue. Initial information was that the driver of a dark-colored car shot a handgun at another car that contained three people as they traveled south on 122nd Avenue (later, it was determined there were actually five people in the vehicle that got shot at). The suspect car was believed to be occupied with two white males in their twenties.

Officers learned through their investigation that the suspect car was in the area of Columbia and North Fessenden. Officers arrived in the area and saw the suspect car in a 7-Eleven parking lot. Because this car and its occupants had just shot at another car, officers conducted a high-risk traffic stop.

Officers confronted the two men who had been in the suspect car as they exited the 7-Eleven. One suspect complied and was taken into custody and the other man got in the car, started it and drove out of the lot. In the course of the encounter, Officer Justin Clary, a ten-year veteran of the Portland Police Bureau, fired his weapon.

Following the shot, the car drove across Fessenden, through an exterior wall and into an apartment. The apartment was unoccupied and no one was injured.

After the car came to a stop in the apartment, Officers called the Special Emergency Reaction Team (SERT) to the scene to assist in taking the suspect into custody. Once SERT made contact with the driver, medical checked his condition and they learned he was deceased.  He was later identified as 28-year-old Billy Wayne Simms. Detectives later located a handgun in the car.

Investigators believe that Simms was one of three suspects involved in a menacing with a gun at a residence in the 14100 block of Southeast Division that occurred on July 28, 2012, just prior to the shooting at 122nd and Division.

Investigators believe that on July 23, 2012, Simms was one of three suspects involved in an armed robbery of marijuana from a marijuana grow at a residence located in the 10400 block of Southwest Division. In that case, three suspects stole marijuana plants at gunpoint and one of the suspects fired a gun in the house prior to leaving. No one was injured. The victim gave officers suspect vehicle’s license plate and it matched the car Simms was driving.

On July 20, 2012, Portland Police Officers assigned to Central Precinct took a report of a suspect attempting to pass a counterfeit $20 bill at the McDonald’s at 10050 SW Barbur Boulevard. In that case, Simms was identified as a suspect again driving the same car he drove at the 7-Eleven.

On August 10, 2012, a Multnomah County Grand Jury ruled the officer was justified in the use of deadly physical force.