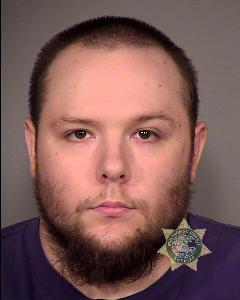 On Saturday, September 29, 2012, at 3:54 a.m., Portland Police officers assigned to East Precinct responded to the Hathaway Apartments located at 3320 Southeast 134th Avenue on a call of shots fired at the complex.

Arriving officers learned that a man had been shot and he was transported to an area hospital. Shortly after their arrival, officers pursued the suspect in the shooting as he fled in his truck. The suspect drove at a high rate of speed attempting to elude them. After a short pursuit, the suspect crashed into a fence at 148th and NE San Rafael. The suspect, 27-year-old Joshua Stephen Baker, exited his vehicle and pointed a rifle at police. Officers Erik Strohmeyer, a 12-year veteran of the Police Bureau and Garry Britt, a 4-year veteran, both fired their weapons.

Following the shooting, the suspect refused to comply with commands and the Special Emergency Reaction Team (SERT) was activated. SERT was able to take the suspect into custody without further incident and a firearm was located at the scene.

The suspect was transported to an area hospital with non-life-threatening injuries. He was later lodged in the Multnomah County Detention Center and charged with Assault 1 with a Firearm, Attempted Murder with a Firearm and Domestic Violence Assault 4.  He was later sentenced to 6 2/3 years in prison, after pleading guilty to using a firearm to carry out the second-degree assault of his neighbor (whom he shot in the arm), and to the fourth-degree domestic-violence assault of his girlfriend.