The Portland Police Bureau was one of 400 law enforcement agencies recruited to participate in the National Crime Statistics Exchange (NCS-X), a program designed to compile a national sample of incident-based crime data using the National Incident-Based Reporting System (NIBRS). PPB's participation in NCS-X facilitated a switch to NIBRS in April 2015 and subsequently changed the way reported crime statistics are calculated and presented. NIBRS was designed to provide a more comprehensive view of the occurrence of crime when compared to traditional reporting systems. NIBRS does this by reporting all unique offenses within an incident rather than just the most serious offense and by reporting more offense types. The following information is intended to explain how offense statistics are counted under NIBRS, how NIBRS differs from traditional reporting methods, and how the change impacts the comparison of new crime statistics to statistics calculated using the old methods.

How we report crime statistics:

Note: Justifiable Homicide is an offense tracked under NIBRS, but is not a crime and therefore, not included in the offense statistics.

One offense is counted per victim of each unique offense type that occurs within an incident.

During an argument an offender threatens two people with a handgun. Threats with a weapon are considered aggravated assault. Two aggravated assault offenses would be counted for the incident, one for each victim. 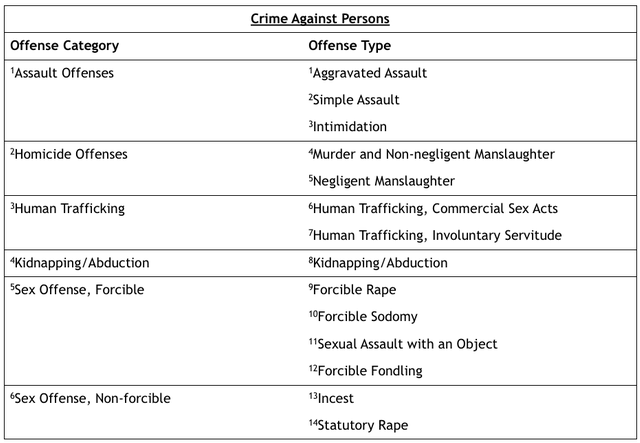 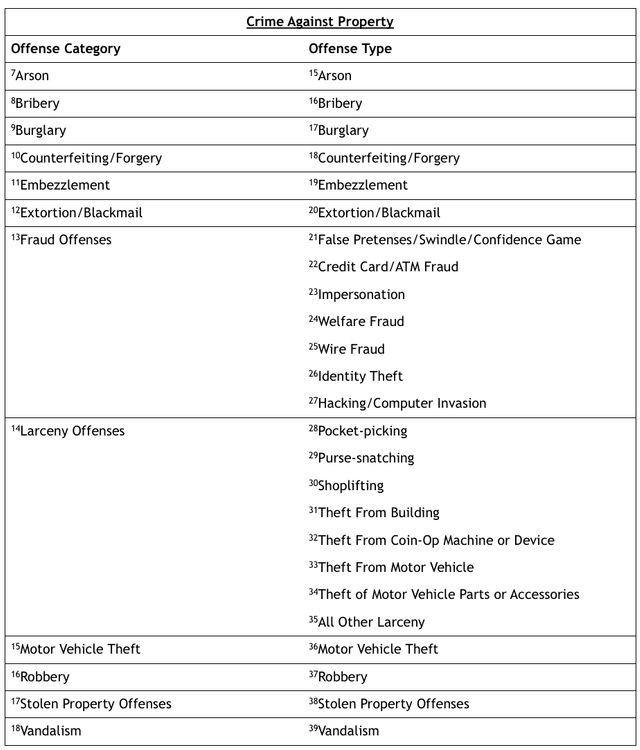 One offense is counted for each unique offense type per incident. 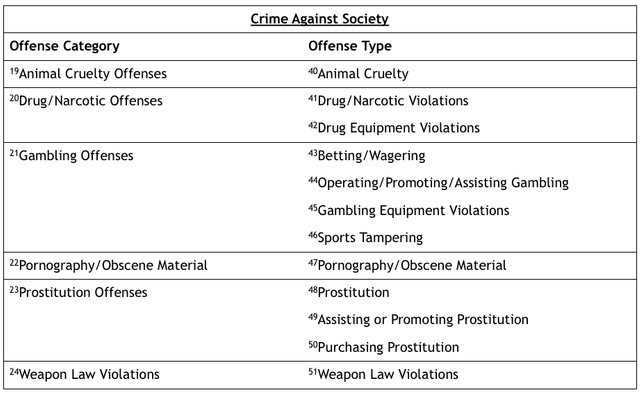 Prior to April 2015, PPB reported statistics using the Uniform Crime Reporting (UCR) Program’s Summary Reporting System (SRS).  The SRS used a hierarchy to decide which offense to report.  In the hierarchy system, only the highest or most serious offense is reported on each case.  NIBRS requires all unique offense types be reported on a case.  The different reporting processes prevent any crime statistics prior to April 2015 from being compared to current NIBRS data.

NIBRS is an incident-based reporting system where all offenses committed by the same offender, or group of offenders acting in concert, at the same time and place are considered to be part of the same incident.  This results in a single report for the incident where multiple victims, offenses, and offenders may be listed.   Prior to April 2015, an incident with multiple victims, offenders, or offenses may have led to multiple reports and multiple cases.

NIBRS includes more crime reporting categories and offenses.  Under SRS, crime was categorized as Person or Property.  NIBRS has three major crime categories: Person, Property and Society.  Specific offenses are also categorized differently under NIBRS.  For example, in SRS robbery is a person crime while in NIBRS robbery is a crime against property.

SRS reported Part I crime which included the 8 most serious offenses and Part II crime which included lesser offenses.  NIBRS reports Group A offenses, which includes all Part I crime, most Part II crime, and some crimes previously not included in SRS reporting.  NIBRS also includes a Group B offense type which is only used when reporting arrest statistics.  Group B offenses capture most of the Part II crime not included in Group A as well as offenses not included in SRS reporting.  As a result, Total Group A offenses are not comparable to total Part I and/or Part II offenses, SRS person crime is not comparable to NIBRS Crimes Against Persons, and SRS property crime is not comparable to NIBRS Crimes Against Property.  The difference between NIBRS and SRS can be better understood by revisiting the examples above.

A car is broken into.  The stereo is stolen as well as a gym bag and some spare change.  Under SRS this would be reported as one larceny (the highest offense on the case).  Under NIBRS, this would be two larceny offenses (one theft of motor vehicle part or accessories and one theft from motor vehicle).

Counting multiple offenses in NIBRS instead of the highest offense in SRS will result in higher reported crime.

A shooting with no victim is reported and an offender is found to be in possession of a weapon as well as heroin and syringes.  Under SRS this would be reported in the statistics as one weapons offense (the highest offense on the case).  Under NIBRS this would be one weapon offense and two drug offenses.

Counting multiple offenses instead of the highest offense will result in an increase of reported crime for those offense types considered lower on the SRS hierarchy.

A fight results in three victims being shot, two homicides and one aggravated assault.  Prior to April 2015, there would have been three police cases – one for each victim.  Under NIBRS there would be one case, with three victims.  In both instances, two homicides and one aggravated assault would be reported.  Three police reports were used to compile the SRS stats (3 total incidents) vs. one report the NIBRS stats (1 total incidents).

The total number of reported incidents (or cases reported) will decrease under NIBRS.

Assault Offenses:  An unlawful attack by one person upon another. Includes aggravated assault, simple assault, and intimidation.

(1) Aggravated Assault:   An unlawful attack by one person on another involving a weapon and/or severe injury to the victim.

(2) Simple Assault:  An unlawful attack by one person on another not involving a weapon or severe injury to the victim.

(3) Intimidation:  To unlawfully place another person in reasonable fear of bodily harm through the use of threats or other conduct without the display of a weapon or actual physical attack. Includes stalking and threats.

Homicide Offenses:  The killing of one human being by another.  Includes willful murder and negligent homicide.

(4) Murder and Non-negligent Manslaughter:  The willful (non-negligent) killing of one human being by another.

(5) Negligent Manslaughter:  The killing of another person through negligence.

Human Trafficking Offenses:  To lure a person into participating in a commercial sex act or forced labor through coercion or if victim is under 18 years of age.

(6) Commercial Sex Acts:  To induce a person into participating in prostitution through coercion or if the victim is under 18 years of age.

(7) Involuntary Servitude:  To lure a person into participating in forced labor (not commercial sex acts) through coercion or if the victim is under 18 years of age.

(8) Kidnapping/Abduction:  The unlawful seizure, transportation, and/or detention of a person against their will, or of a minor without the consent of their custodial parent(s) or legal guardian.

Sex Offenses:  Any sexual act directed against another person, without the consent of the victim, including instances where the victim is incapable of giving consent.   Includes rape, sexual assault with an object, sodomy, and fondling.

(9) Rape:  The carnal knowledge of a person, forcibly and/or against that person’s will or in instances where the victim is incapable of giving consent.

(12) Fondling:  The touching of the private body parts of another person for the purpose of sexual gratification, forcibly and/or against that person’s will or in instances where the victim is incapable of giving consent.

(13) Incest:  Nonforcible sexual intercourse between persons who are related to each other within the degrees wherein marriage is prohibited by law.

(14) Statutory Rape:  Nonforcible sexual intercourse with a person who is under the statutory age of consent.

(15) Arson:  To unlawfully and intentionally damage or attempt to damage any real or personal property by fire or incendiary device.

(16) Bribery:  The offering, giving, receiving, or soliciting of anything of value (i.e., a bribe, gratuity, or kickback) to sway the judgment or action of a person in a position of trust or influence.

(17) Burglary:  The unlawful entry into a building or other structure with the intent to commit a theft.

(19) Embezzlement:  The unlawful misappropriation by an offender to their own use or purpose of money, property, or some other thing of value entrusted to their care, custody, or control.

(20) Extortion/Blackmail:  To unlawfully obtain money, property, or any other thing of value, either tangible or intangible (e.g. reputation), through the use or threats or other coercive means.

Fraud Offenses:  Deceit to induce an entity to part with something of value or to surrender a legal right.  Includes seven specific fraud offenses.

(21) False Pretenses/Swindle/Confidence Game:  The intentional misrepresentation of existing fact or condition, or the use of some other deceptive scheme or device, to obtain money, goods, or other things of value.

(22) Credit Card/ATM Fraud:  The unlawful use of a credit (or debit) card or automated teller machine for fraudulent purposes.

(23) Impersonation:  Falsely representing one’s identity or position to deceive others and thereby gain a profit or advantage, enjoy some right or privilege, or subject another person or entity to an expense, charge, or liability which would not have otherwise been incurred.

(24) Welfare Fraud:  The use of deceitful statements, practices, or devices to unlawfully obtain welfare benefits.

(25) Wire Fraud:  The use of an electric or electronic communications facility to intentionally transmit a false and/or deceptive message in furtherance of a fraudulent activity.

Larceny/Theft Offenses:  The unlawful taking away of property from the possession of another entity.  Includes eight larceny/theft offenses.

(28) Pocket-picking:  The theft of articles from another person’s physical possession by stealth where the victim usually does not become immediately aware of the theft.

(29) Purse-snatching:  The grabbing or snatching of a purse, handbag, etc., from the physical possession of another person.

(30) Shoplifting:  The theft of goods or merchandise exposed for sale by someone other than an employee.

(31) Theft From Building:  A theft from within a building which is either open to the general public or where the offender has legal access.

(32) Theft From Coin-Op Machine or Device:  A theft from a machine or device which is operated or activated by the use of coins.

(33) Theft From Motor Vehicle:  The theft of articles from a motor vehicle, whether locked or unlocked.

(34) Theft of Motor Vehicle Parts or Accessories:  The theft of any part or accessory affixed to the interior or exterior of a motor vehicle in a manner which would make the item an attachment of the vehicle, or necessary for its operation.

(35) All Other Larceny:  All thefts which do not fit any of the definitions of the specific subcategories of Larceny/Theft listed above. Includes bicycle theft.

(36) Motor Vehicle Theft:  The theft of a motor vehicle

(37) Robbery:  To take or attempt to take anything of value from the control, custody, or care of another person by force or intimidation.

(38) Stolen Property Offenses:  Receiving, buying, selling, possessing, concealing, or transporting any property with the knowledge that it has been unlawfully taken.

(39) Vandalism:  To willfully or maliciously destroy, damage, deface, or otherwise injure real or personal property without the consent of the owner or the person having custody or control of it.

(40) Animal Cruelty Offenses:  Intentionally, knowingly, or recklessly taking an action that mistreats or kills any animal without just cause, such as torturing, tormenting, mutilation, maiming, poisoning, or abandonment.

Drug/Narcotic Offenses:  The violation of laws prohibiting the production, distribution, and/or use of certain controlled substances and the equipment or devices utilized in their preparation and/or use.

(42) Drug Equipment Violations:  The unlawful manufacture, sale, purchase, possession, or transportation of equipment or devices utilized in preparing and/or using drugs or narcotics.

(43) Betting/Wagering:  To unlawfully stake money or something else of value on the happening of an uncertain event or on the ascertainment of a fact in dispute.

(44) Operating/Promoting/Assisting Gambling:  To unlawfully operate, promote, or assist in the operation of a game of chance, lottery, or other gambling activity.

(46) Sports Tampering:  To unlawfully alter, meddle in, or otherwise interfere with a sporting contest or event for the purpose of gaining a gambling advantage.

(47) Pornography/Obscene Material:  The violation of laws or ordinances prohibiting the manufacture, publishing, sale, purchase, or possession of sexually explicit material.

Prostitution Offenses:  To unlawfully engage in or promote sexual activities for anything of value.

(48) Prostitution:  To engage in commercial sex acts for anything of value.

(49) Assisting or Promoting Prostitution:  To solicit customers or transport persons for prostitution purposes; to own, manage, or operate a dwelling or other establishment for the purpose of providing a place where prostitution is performed; or to otherwise assist or promote prostitution.

(50) Purchasing Prostitution:  To purchase or trade anything of value for commercial sex acts