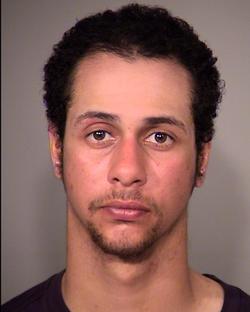 On May 10, 2017, at 7:03 p.m., a caller to 9-1-1 reported that a male in his 20s was threatening people on the TriMet Flavel Street Transit Station.  Officer Jacob Howell of the West Linn Police Department, assigned to the Transit Police Division, was the first to arrive on the scene and encountered 24-year-old Terrell Kyreem Johnson .

Officer Howell began speaking with Johnson, who was non-compliant and would not sit down. Officer Samson Ajir, an eight-year veteran of the Portland Police Bureau who was assigned to the Transit Division, and his partner and brother, Clackamas County Deputy AJ Ajir, arrived on the scene. Johnson ran from the officers -- first westbound on Flavel then back eastbound before running northbound on the MAX bridge over Johnson Creek.

Officer Ajir was in close proximity to Johnson during the foot chase. Johnson reversed course and turned toward Officer Ajir and advanced toward him while displaying a utility knife, prompting Officer Ajir to upholster his handgun and fire multiple times, striking Johnson. After Johnson was down on the ground, additional officers arrived and approached Johnson with a shield for officer-safety, then began rendering immediate medical aid until paramedics arrived. Paramedics determined that Johnson was deceased. A utility knife was recovered from the scene.

At the time of his death, Johnson did not have a fixed address and a family member had an active restraining order/protective order against him.