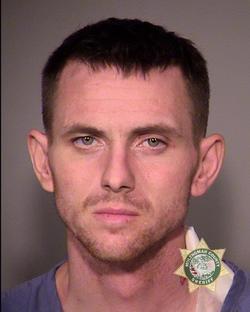 On Wednesday, August 30, 2017, at 12:43 p.m., Portland Police officers were in the area of Southeast Cesar E. Chavez Boulevard and Southeast Clinton Street, when they observed a stolen vehicle, a turquoise 1987 Chevrolet Blazer, being driven on the roadway. It was later determined the vehicle had been stolen during a burglary at the 22000 Block of Russell Creek Road. That burglary and stolen vehicle was reported to the Yamhill County Sheriff’s Office at 7:10 that morning.

Shortly after observing the vehicle, information was broadcast that the vehicle was associated with a bank robbery that was reported to the Washington County Sheriff's Office earlier that day.  Washington County Sheriff's Deputies responded to the U.S. Bank branch at 18485 Southwest Farmington Road at 9:29 a.m. regarding a suspect armed with a handgun who entered the bank, demanded money, and left with an undisclosed amount of cash.  Witnesses said the suspect was a white male and he left the area in a turquoise Blazer. It was later determined that the suspect was 31-year-old Jesse Lee Brockner.

As officers attempted to stop the vehicle, Brockner sped away from the officers.  Officers pursued Brockner in the stolen vehicle through neighborhood streets.  Shortly after Brockner turned north on Northeast 55th Avenue from East Burnside Street, the driver crashed into a parked vehicle.

Officers at the crash scene provided the suspect commands for the purposes of taking the suspect into custody. The suspect was not complying with police commands and during the encounter, Officer David Staab, a 24-year veteran, fired a handgun, injuring the suspect.

Shortly after Brockner was shot, officers approached him and rendered medical aid until emergency medical personnel arrived on scene.  The suspect was transported by ambulance to an area hospital and treated for a non-life-threatening injury. He was later lodged in the lodged in the Multnomah County Jail. Brockner pled guilty to two felony charges and was sentenced in August 2018 to 120 months in prison.