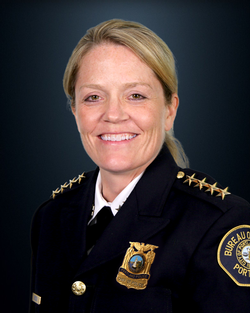 On Tuesday, December 31, 2019, Jami Resch was sworn in as the Portland Police Bureau Chief of Police. Prior to this appointment, she had been serving as the Deputy Chief for the Bureau since May 3, 2019. Chief Resch is the 49th Chief since 1870 when the Metropolitan Police Department was formed.

Jami Resch was appointed to the Portland Police Bureau on February 15, 1999. After serving as a Patrol Officer, Neighborhood Response Team Officer and Tactical Operations Division Crime Analyst Officer, she was promoted to Sergeant in 2008, and was assigned to East Precinct and later the Gun Task Force. She was promoted to Lieutenant in 2012 and assigned to East Precinct and later the Criminal Intelligence Unit. She has also served as the manager of the Portland Police Honor Guard and as a Critical Incident Commander. In October 2016, she was promoted to Captain and assigned to North Precinct; she later served as Acting Commander. In May 2018, she was appointed Assistant Chief of the Investigations Branch before serving most recently as Deputy Chief.

Chief Resch has been an active member in the Police Bureau's Muslim Council, Slavic Advisory Council and Refugee Integration Program. She has also volunteered her time with Camp Rosenbaum, Shop with a Cop and acted as a mentor for the Zman Scholarship Foundation.

She earned a Bachelor's Degree in Allied Health Sciences with a Minor in Psychology from the University of Portland.