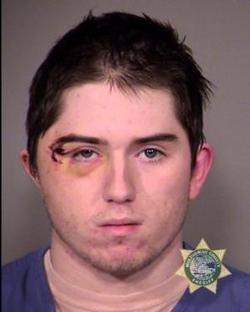 On Wednesday, April 16, 2014, shortly after 2:00 a.m., a Central Precinct officer responded to a reported alarm at Blumenthal Uniforms, located at 9047 Southwest Barbur Blvd. As additional officers arrived, they focused on a suspicious vehicle and began to initiate a stop. The vehicle, a white Chevrolet Suburban, did not stop and a short pursuit commenced and concluded quickly with the vehicle crashing into a pole at Southwest Lobelia Street and Capitol Highway.

The driver of the vehicle, later determined to be 20-year-old Paul Alan Ropp, quickly exited and two other occupants stayed in the Suburban and were surrounded by officers. Officer Jeff Dorn, a 16-year veteran, assigned to the K-9 Unit with his K-9 partner, Mick, and Officer Jason Worthington, a 9-year veteran, assigned to Central Precinct began a foot pursuit of the suspect.

At this point, shots were fired by the suspect, Officer Dorn and Officer Worthington. Officer Dorn was struck two times in the legs.

A necropsy performed today by the Oregon State Medical Examiner determined Mick died of a single gunshot wound. Mick fled after being wounded and was found several hours later, deceased under a nearby hedge.

Calls to 9-1-1 by residents assisted police officers in locating Ropp in the 6900 block of Southwest Oleson Road. The suspect was contacted by SERT and taken into custody without incident. Detectives recovered an AR-15 rifle during a search of the area.

The suspect was transported to a local hospital with a non-life-threatening wound. 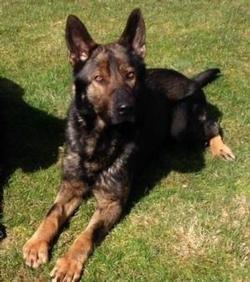 Officer Dorn was released from the hospital and recovered from his injuries.  On May 12, 2015, a memorial was held for Mick.  Mick’s original name was “Dusty vom Langgarten” but was changed to “Mickey” by Officer Dorn’s family. His name was shortened to Mick for street work. Mick was a purebred German Shepherd dog, imported from Germany; he was born September 3, 2012.

On April 29, 2014, a Multnomah County Grand Jury determined the use of deadly force by Officers Dorn and Worthington were justified under state law.

It was determined the three suspects had stolen uniforms from Comcast vans and had plans to rob several local businesses, including a bank. They also wanted to abduct a precious metals dealer.

In December 2014, Paul Alan Ropp was sentenced to 30 years in prison after pleading guilty to charges including attempted murder and assaulting a law enforcement animal.

In February 2015, Steven Alan Young pleaded guilty to charges including attempted kidnapping, burglary, unlawful possession of a destructive device and felony attempt to elude( his elude conviction was dismissed because of his testimony in Riley's case).

In June 2015, Jemaell Riley, 27, was convicted on charges including conspiracy to commit murder, burglary, theft, attempt to elude and unlawful possession of a destructive device. He was sentenced to 17 years in prison, with credit for time served.