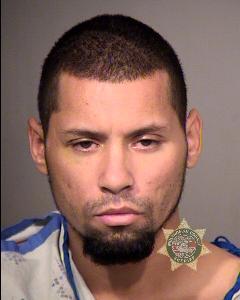 On August 21, 2012, the U.S. Marshals Oregon Fugitive Task Force was executing a warrant for Michael Anthony Tate, Jr., 25, in Aloha, Oregon.  Police Bureau Detective Travis Fields, a 15-year law enforcement veteran, assigned to the Task Force and another task force member knocked on the apartment door and Tate’s relative answered and allowed them to come inside. Tate, who had been sitting on the couch, quickly ran and then turned, and produced a black object from his clothing. Tate raised the object to eye level and pointed in the direction of Detective Fields. Detective Fields fired two rounds, but did not strike Tate. Tate ran into a bathroom, then into a bedroom and jumped out a window. A member of the task force who found Tate, said a black-encased cell phone remained in his right hand after he jumped.

Tate was arrested on accusations of second-degree assault, strangulation and menacing related to the warrant.

The investigation into the shooting was conducted by the Washington County Sheriff's Office. A Washington County District Attorney found no evidence of criminal wrongdoing by Detective Fields and determined it was not necessary to present the case to a grand jury.