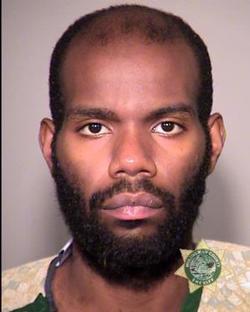 As officers responded to the bank robbery, U.S. Bank employees provided emergency dispatchers a description of the suspect, a black male in his 20s, wearing a dark baseball hat and dark clothing. The description was broadcast to responding officers.

At the time of the U.S. Bank robbery, officers were also investigating a robbery at Ace Check Cashing, located at 2722 North Lombard Street. Employees at Ace Check Cashing called 9-1-1, at 1:16 p.m., and reported that a black male in his 20s, wearing a dark baseball hat and dark clothes robbed the business.

In both robberies, the described suspect entered the location, demanded money, produced a note, obtained an undisclosed amount of cash, and left the locations.

Officers searched the nearby neighborhood for the suspect involved in the U.S. Bank and Ace Check Cashing robberies.

Officer Ryan Reagan, a 19-year-veteran, and his partner officer encountered the robbery suspect (later identified as Chase Arnae Peeples of Tacoma, Washington) at North Oatman Avenue and Saratoga Street. The officers were approximately 50 to 60 feet from him as they gave Peeples commands to put his hands in the air. Peeples did not follow the officers' commands, turned toward the officers and advanced towards them as he reached into his pocket. Officer Reagan fired six shots from his handgun, striking Peeples three times -- once each in the upper right arm, lower left abdomen, and right foot. After Peeples was down on the ground, additional officers arrived and approached Peeples, provided immediate medical aid, and called for an ambulance to respond to the scene. Peeples was transported to an area hospital with non-life threatening injuries. No weapons were recovered at the scene.

Peeples was released from the hospital on November 21, 2017, and lodged in the Multnomah County Jail where he remains in custody on a Federal hold.

On December 13, 2017, a Multnomah County Grand Jury determined that the officer was justified in the use of deadly force in this case.

As part of the internal use of force review process, the Bureau will conduct an internal review of the entire incident and the case will go before the Police Review Board (PRB), which is comprised of community members, Bureau members and representatives from the Independent Police Review Division.

Once there is an adjudication in the criminal cases against Peeples, investigative reports, along with any available grand jury transcripts, will be posted in this space.