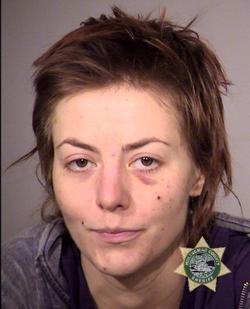 On March 8, 2018,  Central Precinct and Canine Unit officers responded to the report of a burglary in progress in the 800 block of Southwest King Avenue. During a search for the burglary suspect (later identified as Brown), officers located the suspect held-up in a storage area on the property where the burglary was reported. When officers contacted the suspect, there was an exchange of gunfire between the suspect and police officers. The Special Emergency Reaction Team (SERT) and Crisis Negotiation Team (CNT) responded to the location after the exchange of gunfire. The suspect was eventually taken into custody. Once in custody, officers learned the suspect had been struck by gunfire. The suspect was transported to an area hospital by ambulance. After treatment for her injuries she was lodged at the Multnomah County Jail.

During a search of the crime scene, investigators located and seized the firearm believed to have been used by Brown during the shooting.

On Thursday March 22, 2018, the Portland Police Bureau was notified that a Multnomah County Grand Jury determined Portland Police Bureau officers were justified in the use of deadly force in the shooting of 26-year-old Sarah Michelle Brown (also known as Alexis Elizabeth Wilder). The grand jury determined that the use of deadly force against Brown was justified under Oregon law.

After hearing testimony, the grand jury indicted Brown on multiple counts and charges including Attempted Aggravated Murder with a Firearm, Unlawful Use of a Weapon with a Firearm, Menacing, Recklessly Endangering Another Person, Burglary in the First Degree, Theft in the First Degree, Theft in the Second Degree, and Unlawful Entry into a Motor Vehicle. On January 31, 2020, Brown pleaded guilty to six counts--three counts of first-degree attempted murder, two counts of unlawful use of a weapon and one count of first-degree burglary. She was sentenced to eight years in prison.

As part of the use of force review process, the Bureau is conducting an internal review of the entire incident and the case will go before the Police Review Board (PRB), which is comprised of community members, Bureau members and representatives from the Independent Police Review Division.