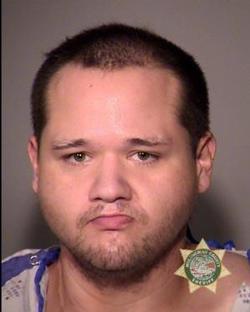 On October 19, 2018, at approximately 8:00 p.m. a Clackamas County Sheriff's Office deputy attempted to stop the driver in a stolen car near the Johnson Creek Fred Meyer store. The suspect attempted to elude the officer in the vehicle and eventually crashed near Southeast 89th Avenue and Gray Street, which is in Clackamas County.

The male suspect ran from the crash on foot, leaving a female passenger in the vehicle. Additional Clackamas County Sheriff's Office deputies, and a Portland Police Canine Unit officer responded to the area to assist in the search for the suspect.

At some point during the search, officers encountered the suspect and shots were fired. The suspect was injured by gunfire and was transported by ambulance to a Portland hospital for treatment. The suspect, 29-year-old Jason Leo Hansen of Vancouver, Washington, was treated at the hospital and later transported to the Multnomah County Jail.

During the incident, a Portland Police Canine Unit Officer Kameron Fender, a nine-year veteran assigned to the Tactical Operations Division, was bitten by a Clackamas County K-9 (dog) and suffered non-life-threatening injuries. The officer was transported by ambulance to a Portland hospital for treatment and was later released. The Clackamas County Sheriff's Office Deputy involved in this incident was Deputy Jon Campbell, a 12-year-veteran of the Sheriff's Office, assigned to patrol.

On November 27, 2018, the Grand Jury ruled the shooting was justified.  It also returned a 10-count indictment against Hanson, which charged him with three counts of attempted aggravated murder with a firearm, two counts of fleeing or attempting to elude a police officer and one count each of being a felon in possession of a firearm, theft in the first degree, unlawful use of a weapon with a firearm, unauthorized use of a motor vehicle, and unlawful possession of methamphetamine.

As part of the use of force review process, the Bureau will conduct an internal review of the entire incident and the case will go before the Police Review Board (PRB), which is comprised of community members, Bureau members and representatives from the Independent Police Review Division. Review Division. Clackamas County will review the actions of their Deputy, per their policy.