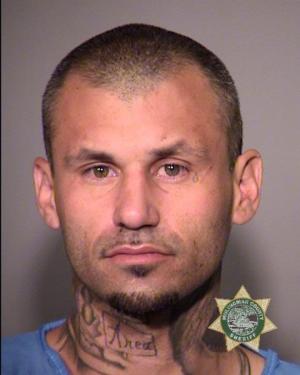 The suspect taken into custody during a robbery and stabbing investigation this morning in the 7800 block of Southeast 92nd Avenue has been identified as 31-year-old Justin K. Sennert. Sennert was lodged at the Multnomah County Jail on charges of Robbery in the First Degree and Assault in the Second Degree and a warrant for Delivery of Methamphetamine, Possession of Methamphetamine, and Possession of Heroin.

Officers and emergency medical personnel arrived and contacted an adult male who appeared to have been assaulted with a knife. Medical personnel transported the victim by ambulance to a Portland area hospital for treatment of what was believed to be a serious but non-life-threatening injury.

Based on preliminary information, investigators believe the victim confronted the suspect as the suspect broke into the victim's parked vehicle. During the interaction the suspected car prowler stabbed the victim then fled the scene.

The suspect was transported to an area hospital by ambulance after he told officers he had swallowed an unspecified substance. The suspect will be identified after he is released from the hospital and is lodged at the Multnomah County Jail.

Anyone with information about this incident should contact Detective Division's Assault Detail at 503-823-0479.