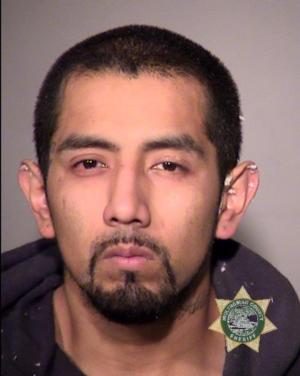 The Portland Police Bureau is asking for the public's help to locate a 27-year-old man wanted for several domestic violence related crimes as well as an outstanding arrest warrant for hit and run.

Gabriel Sandoval is described as a 27-year-old Hispanic male, 5'6" tall, 160 pounds, and short black hair. Sandoval is driving a white 2013 Nissan Altima with Oregon license plate C-A-9-4-8-2-7. Sandoval is believed to be armed with a knife and a baseball bat.

Anyone seeing Sandoval or the vehicle is asked to immediately call 9-1-1. Anyone with non-emergency information about Sandoval's whereabouts should call the Police Non-Emergency Line at 503-823-3333.

This incident began on Wednesday December 5, 2018, at 10:23 a.m. when North Precinct officers responded to the 7-Eleven store at Northeast 60th Avenue and Prescott Street on the report that Sandoval was armed with a baseball bat and left the scene with his female adult girlfriend against her will.

At approximately 11:06 a.m., Sandoval's girlfriend called 9-1-1 from Southeast 82nd Avenue and Rhine Street to request medical attention for a stab wound. Police and medical personnel responded and the victim was transported by ambulance to a Portland hospital for treatment. She is expected to survive.

Sandoval's whereabouts are currently unknown and he should be considered armed and dangerous.