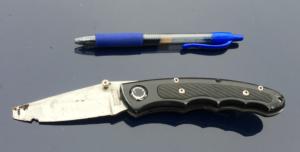 The suspect in the attack on the paramedic has been booked in the Multnomah County Detention Center on a charge of Assault in the Second Degree. He is identified as 38-year-old Jeremiah James Ray (PHOTO).

On Monday, February 25, 2019 at 1:10 P.M., Central Precinct officers were dispatched to a medical assist call to the area of Southwest 5th Avenue and Southwest Sherman Street. Medics were requesting emergency police response.

When officers arrived, they found a paramedic with non-life threatening injuries, including knife wounds. A knife was recovered at the scene (PHOTO). Officers were told the suspect had run off, but he was soon located nearby and officers arrested him.

Paramedics reported to officers that the suspect was not a patient. They said they were stopped at a traffic light when the suspect opened the door to the ambulance and tried to get inside. A struggle ensued and the paramedic was injured.

Assault detectives have responded and are continuing the investigation.

The suspect's name will not be released before he is charged and booked into jail.