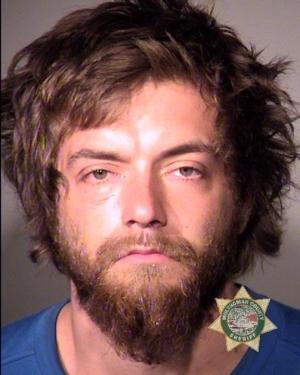 The suspect who was arrested for the stabbing incident on April 30th in the 200 block of Northwest Couch Street has been identified as 27 year-old Jeffery M. Larison. He was booked into the Multnomah County Detention Center on charges of Assault II, Unlawful Use of a Weapon, and a warrant. (PHOTO)

This is an on-going investigation. If anyone has information or video of the incident, they are encouraged to contact Assault Detective Arjay Dran at (503) 823-0483 or arjay.dran@portlandoregon.gov

On Tuesday, April 30, 2019, at 8:53 p.m., Central Precinct officers responded to the 200 block of Northwest Couch Street on the report of a subject who had been stabbed.

When officers arrived they located an adult male who appeared to have a stab wound. The injured man was transported by ambulance to a Portland hospital. The victim's condition is believed to be non-life threatening at this time.

Witnesses in the area provided updates on a possible suspect who was leaving the area on foot. An adult male was arrested by officers in the area of Southwest Park Avenue and Southwest Ankeny Street. Officers are continuing to try to determine what led up to the stabbing and the identity of the arrested subject. There is no identified risk to the public at this time.

Northwest Couch Street from 2nd to 3rd Avenues is closed while the officers and criminalists process the evidence at the crime scene. The closure is estimated to be for 1-2 hours.

This is an on-going investigation. If anyone has information about this incident, they are encouraged to call non-emergency dispatch at (503) 823-3333.