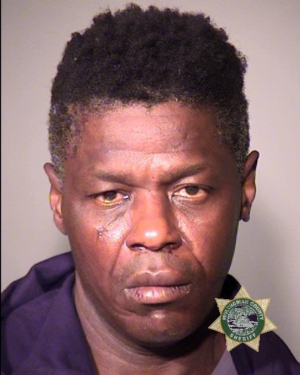 The investigation continues into this morning's stabbing near Northwest 4th Avenue and Northwest Glisan Street. The victim suffered what was believed to be non-life threatening injuries to the neck and arm and was transported to a local area hospital.

The Detective Division and the Forensic Evidence Division arrived on scene to document the incident.

The suspect, 58-year-old Carlos Rodriguez-Lance, was arrested but was also transported to the hospital with injuries relating to the altercation that occurred prior to police arrival. Mr. Rodriguez-Lance was eventually transported and lodged into the Multnomah County Detention Center on one count of assault in the second degree, one count of unlawful use of weapon and on an outstanding parole violation warrant.

###ORIGINAL MESSAGE BELOW###
On Monday, May 13th, at 7;21 a.m., Central Precinct officers responded to the Old Town neighborhood on a disturbance call involving a weapon. Officers arrived and located a victim suffering from some sort of stab wound. The suspect was arrested nearby.

The PIO is not responding to the scene. An update will be provided when more information is gathered.