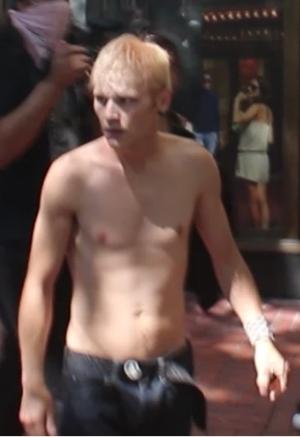 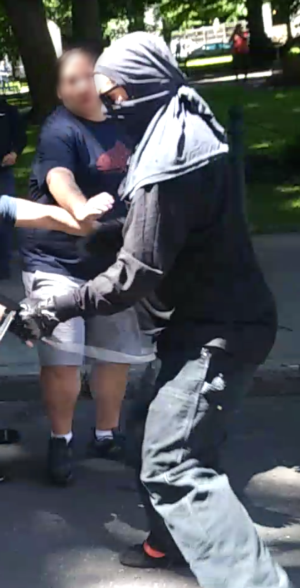 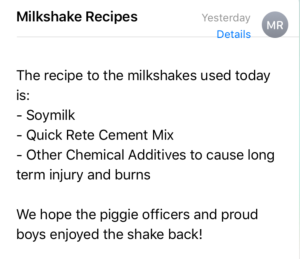 The Portland Police Bureau's Detective Division continues to investigate multiple criminal acts committed during demonstration events on Saturday, June 29, 2019. Investigators are releasing several photographs to the public of individuals believed to be involved in criminal activity. Anyone with information about those pictured in these photographs should contact the Police Bureau. Anyone who witnessed the incidents, should contact the Detective Division at (503) 823-0400 or submit an anonymous tip:
Crime Stoppers of Oregon offers cash rewards of up to $2,500 cash for information, reported to Crime Stoppers, that leads to an arrest in any unsolved felony crime and tipsters can remain anonymous.


The Portland Police Bureau is providing the following additional information:

* Prior to the event, information was circulating that some participants planned to throw milkshakes on others. As the event progressed, officers learned from some participants that a substance similar to quick drying concrete was being added to some of the "milkshakes." A Lieutenant in the field observed some of the material and noted the texture and smell was consistent with concrete. The Portland Police Bureau sent a tweet out to bring attention to this potential hazard and to encourage victims to contact us. The act of throwing any substance on another person without that person's consent constitutes the crime of harassment (ORS 166.065). After the tweet was sent, an anonymous email was sent to Bureau members with a "Milkshake Recipe" (See attached).

* Specially trained officers were deployed in the field and attempted to separate the countering groups of individuals in an attempt to prevent assaults, while continuing to permit free speech as required by law. Several assaults did occur and as officers learned of the assaults, efforts were made to maneuver resources to assist in providing medical care, and to identify and apprehend any involved suspects.

* As the event progressed, Officers observed a number of participants in the crowd who concealed and brandished weapons, including collapsible batons, projectiles, and firearms, to name a few. Attempts were made to effect arrests when possible and resources were available. The presence of weapons in the crowd and assaults on police officers were factors taken into consideration in how to safely and effectively manage a situation that turned into civil disorder.

* Law enforcement resources in crowd management situations are deployed with great thought and consideration and in groups in order to be most effective. Attention is given to balancing the safety of demonstrators, safety of officers and first responders, First Amendment rights, infrastructure, and property. These resources can take time to deploy and shift as situations change and develop.

* There is no current law or ordinance prohibiting covering of the face in a protest and commission of a crime, which makes it more difficult for investigators to identify perpetrators of violence. This is exploited by criminals who engage in acts of violence.

* Per Oregon Revised Statute, 181A.250, law enforcement is unable to record demonstration events unless there is criminal activity occurring.

"The members of the Portland Police Bureau and our partner agencies worked diligently in difficult circumstances on Saturday in an attempt to keep the peace, then respond to violence perpetrated by some of the participants as the event devolved," said Chief Danielle Outlaw. "These events are dynamic in nature and challenging to predict and manage. The acts of a select group of violent individuals do not define Portland, but do have a negative impact on all of us. We are determined to pursue every lead with the goal of arresting those who engaged in crimes and holding them accountable. The public should be aware of the time it takes to shift resources and address violence; it is not immediate and officers have to weigh many factors in their approach. Even with this approach, some of our law enforcement and community members were subject to pepper spray, projectiles, and assault, which is unacceptable and impeded our ability to assist others."