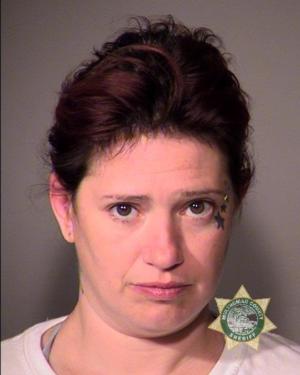 On Friday, August 16, 2019 at 11:05 p.m., East Precinct officers were dispatched to a crash involving a motorcycle and a SUV at Northeast 122nd Avenue and Northeast Stanton Street. Initial information was that someone was performing CPR on the motorcycle rider and that the SUV had left the scene. When officers arrived they found a 1999 Suzuki motorcycle down and the involved SUV driver was returning to the crash site in a separate vehicle. Medical treated the rider of the motorcycle but he was declared deceased at the scene. The Portland Police Bureau Traffic Division's Major Crash Team (MCT) responded and assumed the lead on the investigation.

The motorcycle rider was identified as Karl A. Moeller, 56. His family has been notified of his death.

The driver of the SUV (a 2019 Toyota 4Runner) was Dorothy E. Rafeh, 36 (photo). Her vehicle was located nearby and seized as evidence.

After investigation, officers determined that Rafeh was driving southbound on Northeast 122nd Avenue and turned eastbound on Northeast Stanton Street in the path of the northbound motorcycle. Moeller's motorcycle struck the passenger side of the SUV.

Officer established probable cause that Rafeh was driving impaired and arrested her. She was booked into the Multnomah County Detention Center on charges of Manslaughter in the Second Degree, Driving Under the Influence of Intoxicants, Reckless Driving, Felony Failure to Perform the Duties of a Driver, and Misdemeanor Driving while Suspended/Revoked.
This is the 43rd call out for the MCT this year and the 36th fatality.

Drivers impaired by alcohol or drugs injure and kill thousands of people every year. People consuming alcohol or drugs are urged not to get behind the wheel. We suggest that people get a ride from a sober driver or utilize taxis, rideshare companies, or transit so everyone is safe on our streets.