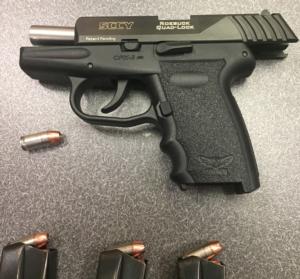 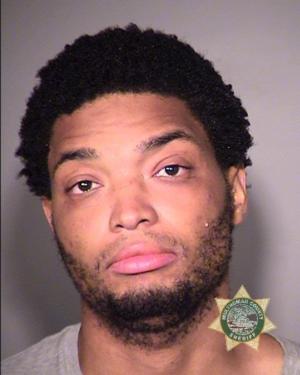 On Friday, August 23, 2019 at 2:52 p.m., North Precinct Officers were dispatched to the area of Northeast 15th Avenue and Northeast Alberta Street in the Vernon Neighborhood on a report of shots being heard. Officers searched the area but were unable to find any suspects or evidence of gunfire.

Officers challenged the suspect. He was compliant and taken into custody. A handgun was recovered (photo). Officers conducted an investigation and were able to locate a bullet strike to a home in the 1000 block of Northeast Alberta Street in the King Neighborhood. Witnesses indicated the other shots appeared to be aimed up in the air. No one reported any injuries.

The Gun Violence Reduction Team responded to assist with the investigation. The suspect is identified as Malcolm K. Menefee, 26 (photo). He was booked into the Multnomah County Detention Center on charges of Unlawful Use of a Weapon (2 counts), Unlawful Possession of a Firearm, Reckless Endangerment, Criminal Mischief in the First Degree, Disorderly Conduct in the Second Degree (2 counts) and city code crimes Possession of a Loaded Firearm in a Public Place and Discharge of a Firearm in City (2 Counts).