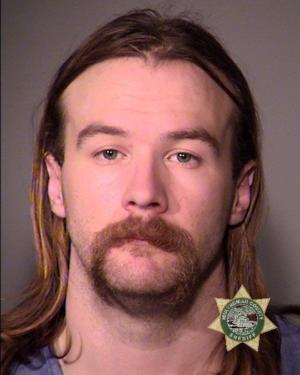 Assault detectives and North Precinct officers have completed their initial investigation of the stabbing. They believe that an employee of a restaurant was on a break in the parking lot when he was approached by the suspect, whom he did not know. The victim was stabbed multiple times. The suspect then walked to his vehicle in the parking lot, where he was arrested by officers. A knife was recovered.

29-year-old Jordan D. Powell-Mathewson (photo), of Beaverton, was booked in the Multnomah County Detention Center and charged with Assault in the Second Degree.

Detectives are still interested in gathering more information about this incident. If anyone has information or video and has not been interviewed by police, please contact Detective Jeff Sharp at 503 823 9773 or jeff.sharp@portlandoregon.gov.


On Friday, August 30th, 2019 at 1:21 p.m., North Precinct officers responded to the 700 block of Northeast Weidler Street on reports that someone was stabbed in the area. When officers arrived they found an adult male victim with a stab wound. He was transported to a hospital by ambulance with an injury that is believed to be non-life threatening.

A suspect has been detained in this incident and therefore there is no threat to the community.

Officers have secured the crime scene and detectives with the Portland Police Bureau Assault Detail are assisting in the investigation.

If anyone has information about the stabbing and has not been contacted by investigators, they are asked to call the non-emergency line at 503-823-3333.

The PIO is not responding to the scene. An update will be provided if appropriate to the investigation.