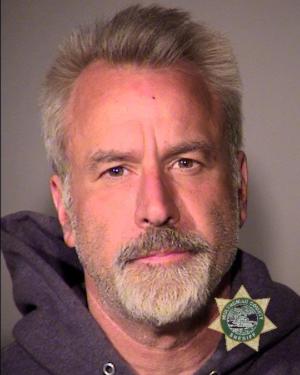 The suspect has been identified as Craig S. Ferrero, 50 (photo). He was transported by ambulance to a hospital as a precaution, and then transported by PPB officers to jail. He was booked into the Multnomah County Detention Center on charges of Attempt to Elude by Vehicle (2 counts), Unlawful Use of a Vehicle, Criminal Mischief in the Second Degree (3 counts), Reckless Driving, Interfering with Public Transportation, and Reckless Endangering (2 counts).

The investigation is continuing. If anyone was in the area at the time of this incident and believes they were a victim of a crime related to it (and have not already been interviewed by an officer), they are encouraged to make a police report by calling non-emergency dispatch at 503 823 3333 and referencing case number 19-308286. If anyone has video of the incident they would be willing to share with investigators, then please contact Officer Peter Braun at Peter.Braun@portlandoregon.gov.

On Friday, September 6, 2019 at about 8:00 p.m., Central Precinct officers started receiving calls that there were piles of gravel on I-5 southbound from about the Naito Parkway on-ramp. A short time later, calls came in that a dump truck driving extremely slow on the freeway was spilling gravel out of its tailgate onto the freeway. Officers responded and attempted to stop the truck, but the driver failed to yield.

The truck exited the freeway and turned northbound on Southwest Barbur Boulevard, continuing to leave piles of gravel behind. Officers used several sets of spike strips to deflate the tires, but the truck kept going until several of the tires were completely torn off. When the dump truck stopped on Southwest Barbur Boulevard north of Southwest Capitol Highway, officers used at least 5 police vehicles to box it in (photos).

The driver, who has not been identified, was arrested. Booking charges have not been determined yet. Officers are investigating to verify that the truck was stolen and where it came from.

This was a dangerous situation that required at least 35 officers and sergeants to resolve, including Central Precinct, Air Support Unit, Traffic Division, Transit Division, and Canine Unit. No one was hurt.

Traffic was impacted for several hours, both at the stop location and where the truck left behind gravel on the roadway.

The investigation is continuing. More information will be released when available.