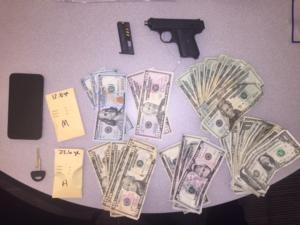 Tactical Operation Division officers have been conducting focused patrols in the city due to several shootings and firearm recoveries in the past few months. On Wednesday, September 11th, 2019 at 11:15 p.m., these officers were engaging two individuals in the 3300 block of Northeast 82nd Avenue. The pair decided to run from officers and fled into a local business. Officers found the two suspects hiding in the bathroom. A firearm, large amounts of money, a large quantity of heroin and methamphetamine were also found in the bathroom along with additional evidence. Coincidently, each suspect also had warrants for their arrest.

The handgun, money and drugs were seized and put into evidence. The investigation continues with the help of the Gun Violence Reduction Team (GVRT) and more charges pertaining to Mr. Hughes and Mr. Prazeau are expected.