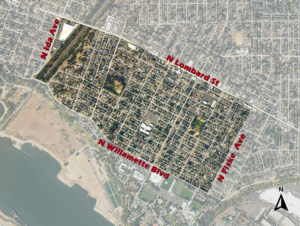 Missing Person detectives continue to investigate the missing person case involving Owen Klinger. A team of investigators from the Detective Division, along with state, local, and federal partners, continue to collaborate in an effort to determine Owen's whereabouts.

At this time we are not ruling anything out and continue to focus efforts on locating Owen. We know Owen's phone has not been sending or receiving data, but would like to clarify that we cannot with certainty say how or why.

We are asking for the public's assistance with checking personal surveillance in the area from North Willamette to North Lombard Streets to North Fiske to North Ida Avenues on October 6th from 7:50 p.m. to 10:00 p.m. (See attached map)

Additionally, if any ride-share operators or individuals recall picking someone up in the area who matches Owen's description, please contact investigators.

PPB is releasing footage from the TriMet bus that was in the area of North Willamette Street and North Portsmouth Avenue on October 6th. After review of the video, it has been determine Owen was walking West on North Willamette Boulevard, not North as previously released. We are hoping this footage helps to develop leads on Owen's whereabouts. In the video, Owen can be seen walking from the left to the right side of the screen and is positioned within the cross walk. The video can be located at this link: https://youtu.be/CNytT3jFCrg

###UPDATE #2 BELOW###
Members of the Detective Division have conducted interviews and have reviewed video evidence concerning the disappearance of Owen Klinger. This is a coordinated effort with the University of Portland and Owen's family and friends.

18-year-old Owen Klinger left the University of Portland campus on Sunday, October 6, 2019 at 7:50 p.m. Owen told his friends that he was going to a team meeting. Detectives were able to confirm that Owen did not attend any team meeting nor was one scheduled.

Based on the investigation, we know Owen withdrew money from an ATM on campus. He then turned off his cell phone before leaving campus. He is observed walking on North Willamette Boulevard at North Portsmouth Avenue towards North Lombard Street. Investigators believe he continued north towards North Columbia Boulevard on foot.

Investigators believe Owen had been watching videos about hopping freight trains. The direction he was walking was an area where freight trains are commonly staged. He had also watched the movie Into the Wild in which a young man leaves to go to Alaska to "go live off the grid."

At this time we do not know where Owen is. We will continue to work with the family and will follow up on any additional leads.

Bureau investigators and University of Portland officials are still working in a coordinated effort however Detective Lori Fonken is the lead on this case. She can be reached at 503-823-1081 and at missing@portlandoregon.gov. Sergeant Joe Santos is the supervisor in charge of this investigation and he can be reached at 503-823-0406 and joseph.santos@portlandoregon.gov

###UPDATE #1 BELOW###
The investigation continues into the disappearance of Owen Klinger. Detectives assigned to the bureau's Missing Persons Unit have interviewed family and friends of Owen. Detectives have also worked with TriMet to establish Owen's last known location in North Portland, near the intersection of North Portsmouth and North Lombard. They have collected video from surrounding businesses and residences in this area as well.

Owen's phone is still turned off. Furthermore, detectives have not received any viable tips in this case. No evidence of foul play has not been discovered. Investigators remain committed to finding Owen and seeing his safe return to his loved ones.

PPB would like to thank the community for their efforts by participating in the many organized search groups.

To reiterate, the picture of Owen facing away from the camera in this release shows the actual clothes he was wearing that Sunday evening.

Bureau investigators and University of Portland officials are still working in a coordinated effort however Detective Lori Fonken is the lead on this case. She can be reached at 503-823-1081 and at missing@portlandoregon.gov.

Information about the Missing Persons Unit can be found at: https://www.portlandoregon.gov/police/article/549803

###ORIGINAL MESSAGE BELOW###
The Portland Police Bureau is asking for the community's help in locating missing 18-year-old Owen Klinger. Owen was last seen on the University of Portland's campus in Northeast Portland around 7:30 p.m. Sunday evening.

Owen is 6'1", 165 pounds and was last seen wearing light-blue hooded sweatshirt, jeans and a drawstring backpack. The picture of Owen facing away from the camera shows the actual clothes he was wearing Sunday evening.

School officials say it's unusual for him to go more than a day without contacting loved ones.

Anyone that has information regarding Owen's whereabouts is asked to immediately call 9-1-1.

The family does want to talk with media. Interested media should email A/Lieutenant Brad Yakots for contact information.

Bureau investigators and University of Portland officials are working in a coordinated effort however Detective Lori Fonken is the lead on this case. She can be reached at 503-823-1081 and/or at missing@portlandoregon.gov.