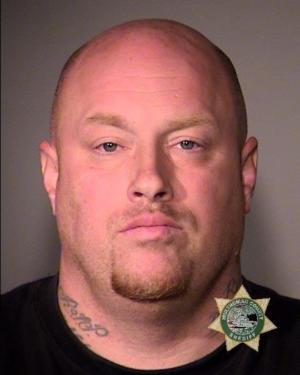 Investigators have charged a man related to a stabbing case last month in the Old Town Neighborhood.

On September 8, 2019 at 2:34a.m., Central Precinct and Entertainment District detail officers responded to a report of a fight involving multiple people near Northwest 3rd Avenue and Northwest Davis Street.

Officers broke up the fight and arrested four people, including Joshua M. Lund, 39, of Portland, for Disorderly Conduct in the Second Degree. During the investigation a victim was found to have a non-life threatening stab wound to the chest. The victim went to a doctor in a private vehicle, was treated, and released. A knife that was believed to be used in the stabbing was located nearby and seized as evidence.

Members of Central Precinct's Neighborhood Response Team did follow up investigation and, on October 9, 2019, arrested Joshua Lund (photo) and added new charges related to the stabbing. After the arrest, a search warrant was served at Lund's residence, where additional evidence was seized. Lund was booked into the Multnomah County Detention Center and is charged with Assault in the Second Degree and Unlawful Use of a Weapon related to the stabbing.