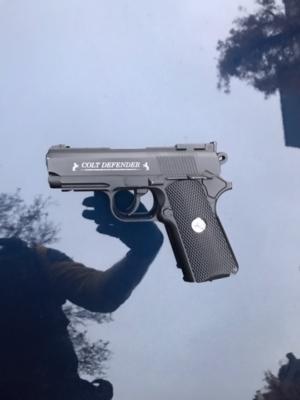 On Tuesday, November 19, 2019, Portland Police Bureau Officers assigned to Portland Patrol Incorporated (PPI), were conducting an area check of the parking garage on Southwest 1st Avenue on the West side of the street between Southwest Morrison and Yamhill Avenues. Officers had information that individuals had been engaging in chopping up stolen bikes in this garage.

Officers were checking the basement level and had encountered some people in the garage. As the officers were clearing the subjects out, they noticed a female subject next to the rear of a car. When the officers spoke to her, the female suddenly reached her hand into a purse and started pulling out what appeared to be a black handgun. The female partially pulled out the gun, then returned it to the purse.

Officers were able to call for assistance and attempted to get the female to comply with their commands. She was not compliant and appeared to be in mental health crisis. The other people in the garage left and the officers contained the area and requested additional resources with the Behavioral Health Unit, Special Emergency Reaction Team, and Crisis Response Team.

Officers kept a running dialogue with the woman in an attempt to get the situation to resolve safely. Officers were able to safely arrest the female and she was transported to an area hospital for evaluation. No subjects were injured as a result of this incident.

The involved firearm was determined to be a very realistic looking bb gun. (PHOTO). The bb gun was seized by officers.

Officers identified the involved female as 21 year-old Amber Purkapile. She was issued a criminal citation for Unlawful Use of a Weapon and Trespass II. The citation was issued so she could be treated by medical, which is a priority.

This is the third incident involving Purkapile with different realistic looking replica firearms, including an incident on October 29 and another on November 9, both in 2019.

Traffic was impacted in the area while officers attempted to safely resolve the incident, but streets have since been re-opened.

Help is available for community members struggling from a mental health crisis and/or suicidal thoughts. Suicide is preventable.

The Multnomah County Mental Health Call Center is available 24 hours a day at 503-988-4888.
If you or someone you know is in mental health crisis please visit Cascadia Behavioral Healthcare's Urgent Walk-In Clinic. The clinic is located at 4212 SE Division and is open from 7am to 10:30pm, 7 days a week. Services are free and available to individuals of all ages.

Information about the Portland Police Bureau's Behavioral Health Unit (BHU) and additional resources can be found by visiting http://portlandoregon.gov/police/bhu

Central Precinct Officers are working on a call involving a female who is reportedly armed with a firearm in the area of the 100 block of Southwest Morrison Street. Officers have closed streets in the area while they attempt contact with the individual involved.

The public is asked to avoid the area. Media staging is at SW 2nd Avenue and SW Morrison Street. PIO is responding and will provide updates as available.