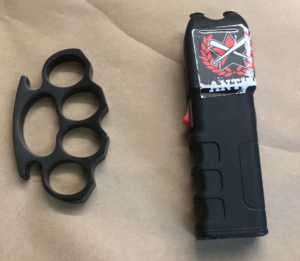 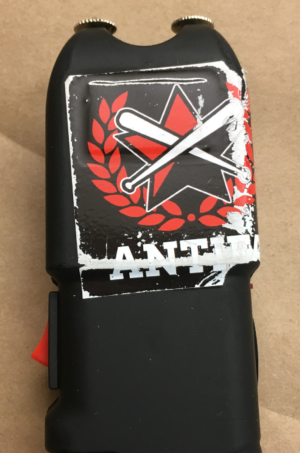 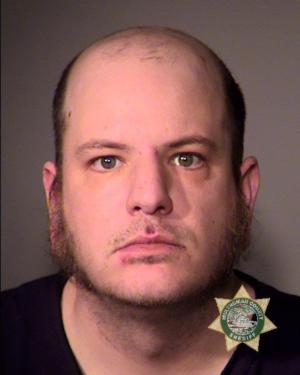 On Wednesday, November 20, 2019, at 2:22 a.m., Officers from North Precinct arrested a subject with an outstanding felony warrant in the 500 block of Northeast Columbia Boulevard.

The warrant was in connection to an incident that occurred on October 6, 2018, involving a demonstration near the 400 block of Southwest Salmon Street. During the demonstration, the driver of a silver vehicle was confronted by some demonstrators and a subject struck the vehicle with an expandable baton, causing damage.

Investigators were able to identify the suspect who damaged the vehicle as 37 year-old Shaun Clancy. Investigators worked with the Multnomah County District Attorney's Office and the case was presented to a grand jury. The grand jury issued a secret indictment warrant for one count of Criminal Mischief I on August 13, 2019.

During the arrest, Officers located a pair of brass knuckles and a stun gun concealed on his person. (PHOTOS)

Clancy was transported to the Multnomah County Detention Center and booked on charges of Carrying a Concealed Weapon (not a firearm) related to the weapons located during the arrest and the warrant for Criminal Mischief I.

If anyone has information about this case, contact Acting Sergeant Matt Jacobsen at (503) 823-0097 or matthew.jacobsen@portlandoregon.gov

"I am pleased with our investigator's continued efforts to identify and arrest those who engage in criminal behavior during demonstrations," said Chief Danielle Outlaw. "We will continue to work with our partners on all open cases involving criminal activity at demonstration events."

On Saturday, October 6, 2018, there was a vigil/demonstration in response to a fatal officer-involved shooting that occurred on September 30, 2018. Various individuals and groups were in attendance at the event, including the family and friends of the man involved in the shooting.

Prior to the event two police liaisons unsuccessfully attempted to communicate with event planners to establish a route for the march. This would have helped facilitate a safe route for demonstrators, while also ensuring road users had alternative routes.

On the day of, the Police Bureau actively monitored the march with the objectives to try to provide a safe environment for all and facilitate a peaceful event so that those involved were able to express their constitutional rights to free speech. The march ultimately involved a small part of downtown; the Bureau was aware of traffic disruptions and two incidents where drivers and protesters exchanged words. Police have been made aware of one vehicle that sustained damage, but there was no other reported property damage or damage to infrastructure and no one was injured. Command was closely monitoring these situations and had to make the careful decision to balance the need to clear the street to allow for the flow of traffic versus the risk of officers having to potentially use force and enflame an already tenuous situation.

When determining whether or not take law enforcement action at protest events, the most critical factor the Bureau takes into consideration is whether or not a police response would escalate or deescalate tension. Escalation can lead to community members and officers getting injured or worse.

"We recognize the strong community concern and interest regarding how police officers respond to crowd control situations," said Chief Danielle Outlaw. "There is no cookie-cutter response to these events. The complexity of each demonstration/protest is different and requires thoughtful decision-making.

"We will continue to review the most appropriate course of action and proper balance in our responses for these dynamic events."

Those wishing to provide feedback can do so at: https://www.portlandoregon.gov/police/30697?action=UpdateItem&category_id=1143