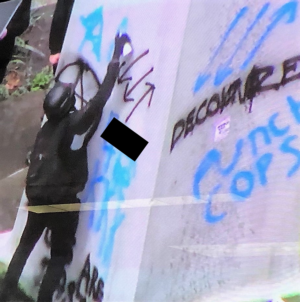 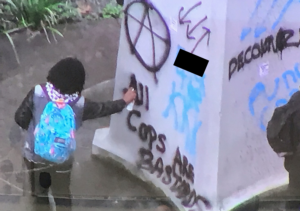 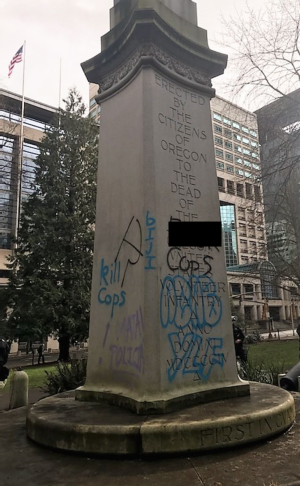 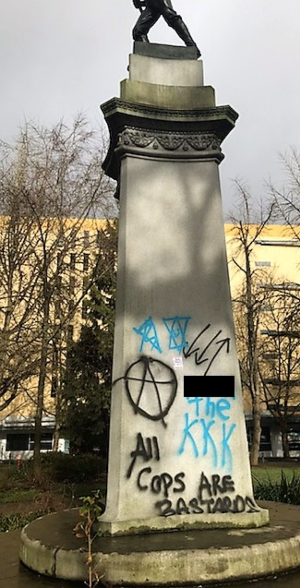 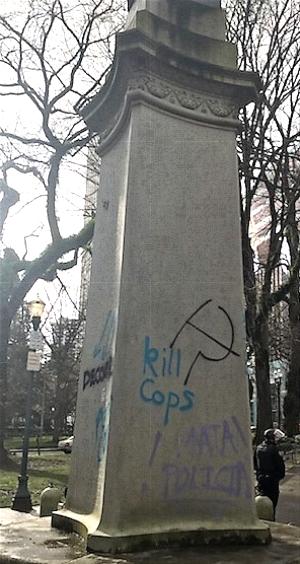 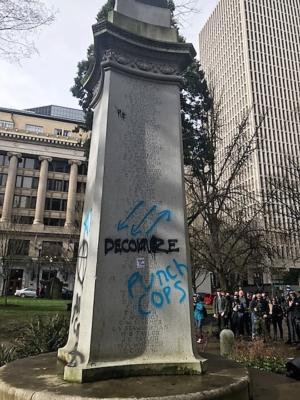 Three arrests were made and more are possible after a small demonstration in and near Lownsdale Square Park in downtown Portland.

On Saturday, February 8, 2020, Portland Police received information that a previously planned demonstration at the Multnomah County Courthouse had been canceled. PPB put out that information via Twitter.

Despite that, a counter-rally took place in Lownsdale Square Park. While the rally was being held and was peaceful, Portland Police officers stayed away. However, some people in the group began acting in a violent, threatening manner against attendees who were legally capturing photos and videos. Officers responded to address specific criminal acts.

Metal-tipped umbrellas were used to jab toward people and chase them down the street, and objects (including rocks, concrete, batons, cans, and food) were thrown at community members and police. There has also been vandalism, including spray paint on walls and a war memorial (photos). At least two incendiary devices (believed to be flares) were thrown into the street while vehicular traffic was driving by.

We are sharing photos of suspects involved in some of the criminal activity. One of the pictured was arrested after a short foot pursuit (Arrested Suspect). The other has yet to be identified (Wanted Vandalism Suspect). If anyone has knowledge of the unknown suspect's identity, or more photos of this or any crimes that took place during this event, please send the information to CrimeTips@portlandoregon.gov .

If anyone was a victim of a crime and has not reported it to officers, they are encouraged to call police non-emergency dispatch at 503-823-3333 and make a police report.

The identities of those arrested will be released, after they are booked into jail or cited, to inquiring members of the media who e-mail the Public Information Officer at PPBPIO@portlandoregon.gov .

This event, which spanned nearly four hours, required a large police response, which limited our ability to respond to calls for service citywide during this period.

Portland Fire and Rescue medics treated three people for exposure to pepper spray deployed by community members. Law enforcement officers did not use force against anyone during this event.

During the event, there was an incident where a pedestrian was struck by a vehicle at Southwest 2nd Avenue and Southwest Madison Street. The pedestrian was transported to a hospital with a non-life threatening injury. The driver of the vehicle remained on scene and cooperated with police.

"I want to acknowledge the community members who came down to peacefully assemble and exercise their freedom of speech rights," said Chief Jami Resch. "Unfortunately, a group of people chose to engage in dangerous, illegal behavior. I appreciate the thoughtful, measured response by our officers and law enforcement partners."

Chief Resch added, "A small group's actions negatively impacted public safety of the entire city because resources had to be diverted to this event."

Freedom of speech and assembly are constitutionally protected regardless of the content of the speech or alignment with city values. The Portland Police Bureau's role is to promote public safety during these events in a neutral manner. In order to do that, the participants need to be aware of and follow city, state, and federal laws, as well as lawful police orders prior to, during, and after the event.

The Police Bureau encourages any demonstration event organizer or organization to follow established guidelines for obtaining a permit to use a City of Portland park and/or use City of Portland streets for protest events.

Anyone with information about individuals planning to commit criminal activity at any events is asked to share that information with the Portland Police Bureau. Information can be sent via email to CrimeTips@portlandoregon.gov.

The Portland Police Bureau's Liaison Team attempts to work with all event organizers to establish an environment where community members may safely practice their First Amendment rights of speech and assembly. The Police Bureau Liaison Team is available to assist event organizers in planning a safe event for participants, Portland community members, and businesses. Liaison Officers may be contacted at PPBLiaison@portlandoregon.gov or through its Twitter account @PPBLiaison

During today's event, the Portland Police Bureau distributed real-time public safety information via Twitter. To stay informed of these updates, follow us on Twitter (@PortlandPolice), sign up for our press releases at https://www.portlandoregon.gov/police/flashsignup.html , or check for posted press release updates on our web site at https://www.portlandoregon.gov/police/29797