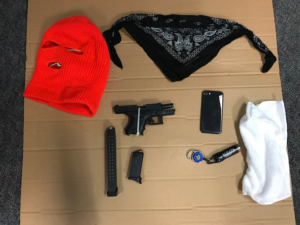 During the demonstration which began the evening of June 1, 2020 and continued into the morning of June 2, 2020, multiple people were booked and cited.

The below listed persons were arrested and booked into the Multnomah County Detention:

The below listed persons were arrested, cited, and released:

One group gathered in Pioneer Courthouse Square earlier in the day and the Portland Police Demonstration Liaison Officers (DLOs) worked with event organizers within the crowd to determine where they wanted to go. After facilitating their travel to Waterfront Park, the DLOs also arranged to have some of their supplies, such as food and water, transferred to their new location.

At about 6 p.m., a second group gathered for a rally at Revolution Hall at Southeast 13th Avenue and Stark Street. At about 7 p.m., this large group walked west toward downtown, crossing over the Burnside Bridge. They proceeded downtown peacefully to the fenced area at Southwest 1st Avenue and Salmon Street.

Organizers of this group asked to speak with the police; DLOs engaged with the demonstrators. This productive conversation led to a peaceful march back to Pioneer Courthouse Square.

After another peaceful rally at the Square, the group marched east over the Burnside Bridge to Revolution Hall. As this demonstration came to a conclusion, at about 11:30 p.m., organizers made it clear that they expected the participants to peacefully disperse.

Shortly before midnight, a group of approximately 100 protestors gathered at Southwest 4th Avenue and Salmon Street. Some of the protesters started throwing projectiles at the officers, including glass bottles and rocks. One officer suffered minor injuries from a thrown projectile. The sound truck notified the group that they were involved in an unlawful assembly and needed to disperse. When they did not, officers used crowd control munitions to disperse them.

During this time, officers observed several vehicles that were moving through the streets with the protestors to provide them with a continual source of supplies. Officers observed one driver handing out items to subjects on foot. Traffic officers stopped that driver, but before they could detain her, she struck multiple vehicles in an efferent to elude police. She sped away and the Air Support Unit was able to provide updates on the vehicle location and direction of travel. Spike strips were deployed and the vehicle stopped near Southeast 14th Avenue and Franklin Street. Officers arrested the driver. One officer suffered minor injuries in this incident.

The remaining protestors dispersed by 1 a.m.

Officers arrested over a dozen adults Monday night into Tuesday morning. The specifics regarding these arrests are still being finalized at the time of this press release. More information on those arrested and the criminal charges will be provided in an updated release when that information is available. Two firearms were seized from two separate individuals who were arrested (PHOTOS).

"Thousands of demonstrators participated in an extensive march without engaging in violence or destructive behavior," said Chief Jami Resch. "Thank you for keeping this event peaceful. Your efforts to police the event yourselves created a safer environment for all. We will continue to arrest and hold responsible those who engage in acts of violence directed at the police, community members, or who commit other criminal acts."