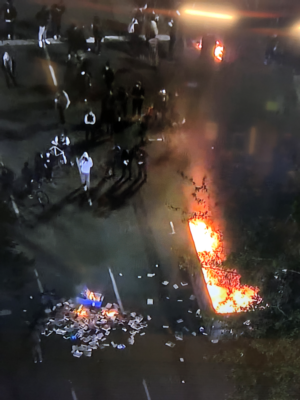 There was one adult arrest, and two cars were towed during the demonstrations which began the evening of June 3, 2020 and continued into the morning of June 4, 2020.

28- year-old Steven Richardson was booked into the Multnomah County Detention Center on charges of Riot, Menacing, Attempt to Elude (Vehicle), Reckless Driving, Reckless Endangerment, Disorderly Conduct II, and Unlawful Use of a Weapon.

On June 3, 2020, at about 6:00 p.m., two organized groups of demonstrators gathered in the city of Portland for the sixth day. One group gathered in Pioneer Courthouse Square in Downtown Portland and the other gathered at Revolution Hall in Southeast Portland.

At about 9:20 p.m., thousands of the demonstrators moved from Waterfront Park to the area of Southwest 3rd Avenue and Southwest Jefferson Street where the demonstration continued peacefully.

At about 11:15 p.m., Portland Police Bureau's Demonstration Liaison Officers (DLO's) spoke with some organization members and had a productive conversation. The demonstration remained peaceful for multiple hours.

At about 2:00 a.m., the peaceful demonstrators dispersed from the area of SW 3rd Avenue and Jefferson Street; the agitators remained.

On SW 2nd Avenue between SW Main and Salmon Streets, agitators set a large dumpster, newspaper boxes, what appeared to be a large pile of books. Officers intervened at about 2:30 a.m., when a security officer was hit in the head by an agitator. Windows on a nearby building were also broken out. Officers created a safety barrier for the security officer to get the medical attention he needed. When officers were leaving from creating the safety barrier, a PPB officer was hit in the jaw with a full can beer, by one of the agitators. The officer received medical treatment.

At 3:00 a.m., agitators continued to vandalize buildings, light fires, and cause a civil disturbance. PPB advised people who are still in the area that a civil disturbance had been declared and they needed to leave. If they did not leave, force or crowd control munitions would be used against them.

By 4:00 a.m. PPB had dispersed the agitators, made arrests and towed two vehicles associated with the agitators.

During tonight's events, a vehicle was stopped and the driver was arrested from an incident which occurred during the demonstration the previous night. The vehicle nearly struck one of Portland Police Rapid Response Teams. This is an ongoing investigation and more details will be released as information becomes available.

"The Portland Police Bureau continues to have dialog with the demonstration organizers to facilitate safety for all and to allow for the exercise of First Amendment Rights," said Chief Jami Resch. "Tonight was a great example of a safe and responsible demonstration. This speaks to the testament of the thousands of participants and sends a powerful message. I greatly appreciate the community for expressing themselves while respecting others.

"We have witnessed a pattern of behavior in the past several days where select agitators remain and target the police, engage in crimes, and cause disorder. We will continue our efforts to identify, arrest, and hold responsible those who engage in crimes in our City."