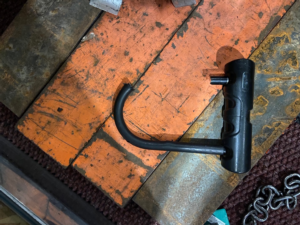 Multiple demonstrations occurred in Portland in the evening of June 16 through the early morning hours of June 17, 2020.

One group of several hundreds assembled at Jefferson High School and marched to the top deck of the Fremont Bridge (I-405 Southbound). A traffic advisory was provided via social media. For over an hour, the group rallied, then dispersed around 10 p.m.
A separate group gathered downtown near the Justice Center at Southwest 3rd Avenue and Main Street. This group blocked the street and marched around to the 2nd Avenue side, which is the entrance to PPB's Central Precinct.

A little after 11 p.m., the flag was removed from outside the Central Precinct doors. The flag cord was tied from the door to a fire hydrant on the Southside roll up door to prevent it from opening. Additionally, the Central Precinct main doors were locked from the outside with a u-lock blocking anyone inside from leaving. This presented a life safety issue for those inside. The flag was lit on fire and one person was injured by the burning flag. Warnings were given and the crowd left the area. Officers removed the exterior locks and objects on the doors.

The group marched to the Pearl District and there were some reports of graffiti.
Just after 1 a.m., a vehicle encountered the crowd near Southwest 3rd Avenue near Alder Street. The vehicle struck several demonstrators and left at a high rate of speed, driving the wrong way on streets. It appeared to be followed by several other vehicles that were associated with the protesters.

Officers located three patients and were able to provide support while Portland Fire & Rescue medics tended the patients. Two were transported by ambulance as trauma entries; another was taken by personal vehicle for treatment. All injuries as believed to be non-life threatening.
PPB's Air Support Unit (ASU) Officers were able to watch the vehicle and provide location updates as the suspect vehicle drove recklessly. ASU Officers were able to vector in the East Precinct Officers to the location where the driver had stopped and fled on foot near the Southeast Clinton Street and 100 Avenue. The driver was arrested. The suspect vehicle had also struck at least one other vehicle and a barrier during the incident.

The driver who was arrested was booked at the Multnomah County Detention Center for Felony Hit and Run (3 counts), Reckless Driving, and Possession of a Controlled Substance (Hash). The driver was identified as 27 year-old Anthony Eaglehorse-Lassandro.

Some of the marchers dispersed and others returned to the Justice Center. The majority of the group left around 2 a.m.

No other arrests were made related to the demonstrations.