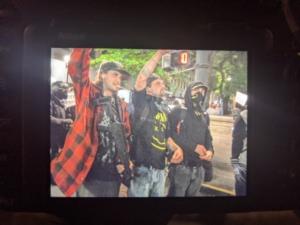 One group of several hundred demonstrators assembled at Revolution Hall and marched across the Hawthorne Bridge to Waterfront Park. For over an hour, the group rallied, then dispersed around 9:30 p.m.

A second group gathered downtown near the Justice Center on Southwest 3rd Avenue between Southwest Main and Southwest Madison Street. This group blocked the street for nearly an hour, throwing projectiles such as oranges, at the Justice Center doors. Meanwhile, a third group started gathering in the Pearl District, setting up several tents near the 900 block of Northwest Glisan Street.

Around 10 p.m., the group that had gathered outside the Justice Center began marching in a northwesterly direction towards the group on Northwest Glisan Street. The two groups joined together on the 1000 block of NW Glisan Street.

Once both groups were together, the demonstrators on NW Glisan Street shined several lasers and lights at Pearl District buildings. The demonstrators set up several more tents and many people sat in the street. Around 11:50 p.m., demonstrators started moving dumpsters, pallets, and other items which could be used as barricades to surrounding city blocks.

At approximately 5:30 a.m., there were still an estimated fifty people in the area. An unlawful assembly was declared in the area of Northwest 11th Avenue east to NW Park Avenue and NW Irving Street south to NW Everett Street. The sound truck made announcements for those in the area to leave and for residents in the area to shelter in place. At about 5:40 a.m., Officers began clearing the area.

One arrest was made and the rest of the people in the area dispersed. 27 year-old Hailley Nolan was charged with Interfering with a Police Officer and booked into the Multnomah County Detention Center.

Clean-up for the area was coordinated and crews immediately responded to the scene.

No CS gas was used by Portland Police Bureau members during this event. There was no force used to disperse the crowd.

"I am proud of our PPB officers and command staff who carefully and safely dispersed this unlawful assembly," said Chief Chuck Lovell. "The actions taken by some to barricade City streets and begin the creation of an autonomous zone caused great concern for public safety. Emergency responders need to be able to respond to critical life safety calls. There are acceptable ways to express first amendment rights and this was beyond the threshold for what is acceptable for Portland."