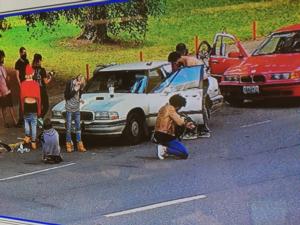 On June 23, 2020 at approximately 7:37 p.m., Central Precinct officers learned of an unsecured rifle, leaning against a vehicle, on the 300 block of Southwest Main Street.

For at least 20 minutes, without anyone in control of it, the rifle leaned against a vehicle (photo). The vehicle was parked in an area associated with demonstration activity and several demonstrators were in the near vicinity of the vehicle and rifle.

The owner of the rifle, 22-year-old, Isaac J. Schott, had been previously contacted over the last several weeks during demonstrations, however, had not been violating any laws during those contacts. As officers began to develop a response plan to address the rifle, officers learned two subjects other than the rifle owner took control of the rifle. One subject appeared to point the rifle at the Hatfield Federal Courthouse while the other subject pointed the rifle northbound on Southwest 3rd Avenue.

Schott was criminally cited for Disorderly Conduct II and Menacing due to staffing constraints at the time. The rifle was taken as evidence. There was no identified on-going risk to the community related to this incident.

If anyone has information regarding the identity of the two subjects holding the rifle, they are requested to share that information with the Portland Police Bureau. Information can be sent via email to CrimeTips@portlandoregon.gov.