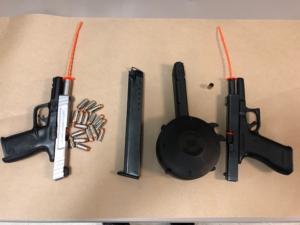 Arriving officers were flagged down by a 911-caller who had been parked in a vacant business parking lot where the shots had been fired. The 911-caller told responding officers he heard approximately 30 gunshots coming from the center of the parking lot. Just prior to hearing the gunshots, three vehicles associated with the gunshots were reportedly doing cookies in the parking lot. The vehicles were no longer at the location. Officers checked the area for evidence of gunfire and located two .40 caliber casings and four 9mm casings. Officers collected the casings for evidence.

At approximately 2:49 a.m., an officer in the area of the 12000 block of NE Sandy heard several more shots coming from the same prior area. Several officers responded to the location and the original 911-caller called back to say the vehicles were back in the parking lot.

Arriving officers developed a plan to address the three vehicles in the parking lot. With the help of the Portland Police K9 unit along with East Precinct patrol officers, eleven occupants between the three vehicles were contacted. Officers learned there were cartridges and spent casings inside one of the vehicles, as well as a 40 caliber semi-automatic pistol with 30 round magazine and a 9mm semi-automatic pistol with drum style magazine. Both firearms and magazines were taken for evidentiary purposes. There were no victims of gunfire and no known damage to property.

31-year-old Ruthkeyshia Yonell Smith was charged with Unlawful Use of a Weapon and booked in to the Multnomah County Detention Center. 19-year-old Medero Prince Moon Jr. was cited and released on an outstanding misdemeanor warrant.