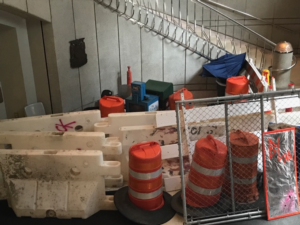 The following individuals were arrested and booked into the Multnomah County Detention Center on the listed criminal charges:

A group gathered near the Justice Center on June 26, 2020, and blocked the streets and chanted. After several hours, the tenor of the group shifted and some attempted to barricade the portico door on the North side of the building with plastic road barricades and spray painted cameras on the building.

Additionally, some group members began dragging white plastic barricades from the lot behind a nearby business out into the street and placed them around the doors of Central Precinct. (Photo included of some of the barricades recovered).

The sound truck was on scene providing warnings and admonishments to the crowd members. While officers cleared the area, some crowd control munitions were used, but no CS gas was deployed. Laser pointers were directed at officers.

One officer was injured while effecting an arrest. The officer required medical treatment for the injury, which was considered non-life threatening.

Several arrests were made; information on arrests will be provided as it becomes available.
During the demonstration event, there were several fake calls reported to dispatch near the Justice Center including a report of a subject with a gun and someone shot. These were determined to be false reports.

Multnomah County Sheriff's Office personnel were present and responsible for the County portion of the Justice Center. Refer to them directly for inquiries related to their interactions.