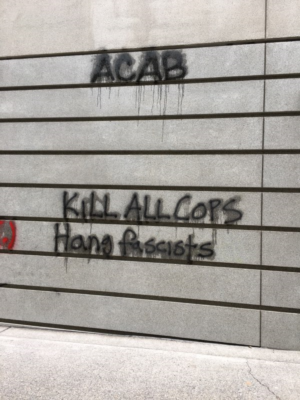 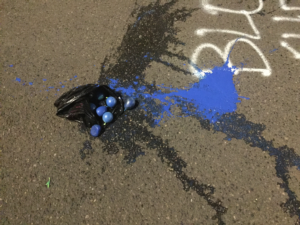 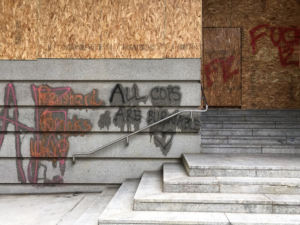 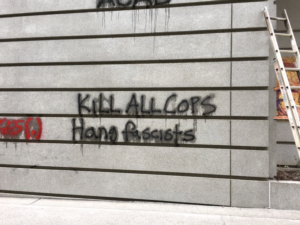 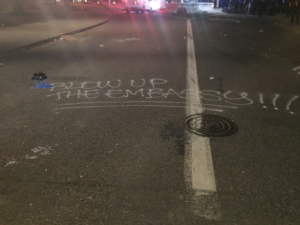 A group of demonstrators started gathering around 7:30 p.m. on June 27, 2020 and began blocking the street at Southwest 3 Avenue/Main Street. They formed a human chain to pull plastic barriers out of the pit at Southwest 2/Salmon Street behind a former restaurant. The fencing and barricades appeared to be cabled together and were used to block off the street. A woman with a hand held speaker was heard calling for violent resistance from the crowd.

Warnings and direction were given numerous times from the sound truck and on social media including: the streets were open to vehicular traffic, to get out of the street, and not to block the street with barricades. The crowd remained in the street and continued to block the intersection with fence panels and barricades. Graffiti was applied to the Justice Center, the Federal Courthouse, and the surrounding area including several tags about killing cops. (PHOTOS)

Just prior to 10:30 p.m., an unlawful assembly was declared. Warning were again provided by sound truck and social media and a dispersal order was given, including notice that arrests, force, or crowd control munitions may be used. The crowd remained in the area.

Officers responded to the intersection and made efforts to move the crowd away from the barricades so they could be cleared and the street could re-open. During this engagement, officers had rocks, glass bottles, and paint thrown at them. Lasers and lights were directed at the officer's eyes. Crowd control munitions were used during this interaction, but not CS gas.

The barricades and materials blocking the streets were removed and officers began leaving the area. As soon as the officers left the area, the crowd moved back to the intersection and remained in the street.

At about 1:20 a.m., the group moved to Southwest 2 Avenue between Madison and Main Streets and began to block the Central Precinct door and the roll down gates. Warnings were again provided and arrests were made. During an arrest attempt, an officer was struck in the face with a skateboard and sustained minor injury. The subject who resisted arrest and assaulted the officer with the skateboard was arrested.

Two dumpsters were pulled from a nearby building into the street. An unlawful assembly was again declared and the area of Southwest 1-4 Avenues/Clay to Morrison were closed. The crowd was ordered to disperse. A few sidewalk garbage cans were set on fire. The closure area was extended to include the area up to 6 Avenue. Efforts to disperse the crowd were made when they did not disperse on their own; crowd control munitions were used, but not CS gas.
The crowd was mostly dispersed just after 2 a.m.

Eight arrests were made and information on these arrests will be released as it is available.

Multnomah County Sheriff's Office personnel were present and responsible for the County portion of the Justice Center. Refer to them directly for inquiries related to their interactions.