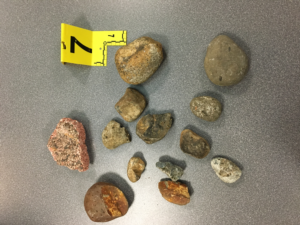 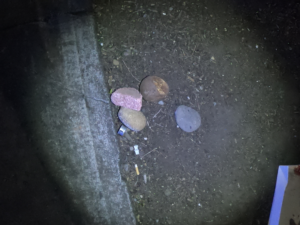 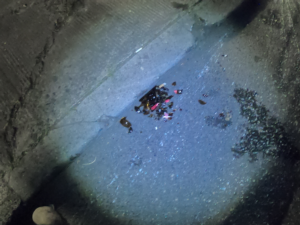 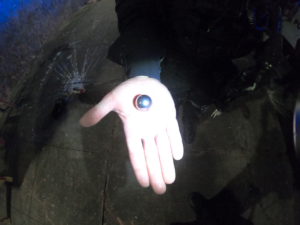 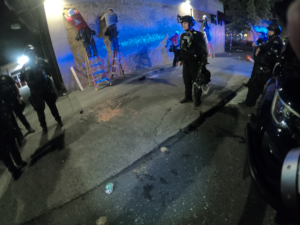 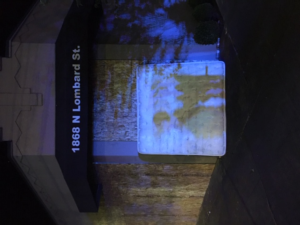 In the evening of Monday, July 13, 2020, a group of demonstrators gathered in Kenton Park at 8417 North Brandon Avenue and marched to the 1800 block of North Lombard Avenue where the Portland Police Association building is located.

A group of several hundred blocked the street near the 1800 block of North Lombard. Multiple warnings were provided via the sound truck that the group needed to get out of the street or selective arrests would be made and those in the area were subject to force or arrest.

Officers were making an arrest when several members of the group interfered and pulled the subject away from the officers. Another arrest was made in the area. The individual who was arrested is still subject to arrest and faces additional charges related to escape; those who interfered also committed the crime of Interfering with a Police Officer and are also subject to arrest.

Some members of the group screamed, yelled, and chanted at officers and made noise with squeak toys, cow bells, amplified sound devices and other items. Some shined bright lights in strobe mode and pointed lasers in the officer's eyes while the officers were standing on the sidewalk.

Officers stood by while the windows of the building were boarded up. While the construction company was boarding the windows, some in the crowd threw objects and one of them struck a worker. Several announcements were made on the sound truck warning the crowd that engaging in criminal activity would subject them to arrest, force and/or munitions.

Rocks, bottles, broken pieces of brick, ball bearings, paint filled objects, and other items were thrown at officers. At one point, a mattress was scorched as someone attempted to light it on fire. A subject climbed onto the roof and jumped off.

Due to the life safety risk presented by many members of the crowd, a riot was declared and dispersal orders were given. The area of North Denver Avenue to I-5 and North Bryant to Farragut Avenues were closed and the crowd was provided warnings and opportunities to disperse and leave. Many chose to remain and some selective arrests were made.

Officers remained in the area until the board up was completed at about 2:45 a.m. Officers left the area and a group returned to the PPA office and fired pyrotechnics at the building and stacked a mattress against the wall. These dangerous actions presented a risk of fire to the building and the surrounding residential neighborhood. Officers returned and successfully dispersed the group.

Updates on arrest information was not available at the publication of this release. We will update the release when that information becomes available.

CS gas was not deployed during this incident. An officer sustained a minor injury to the hand from a thrown brick.