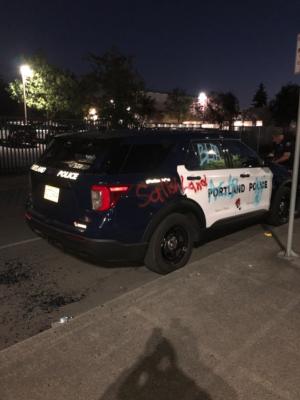 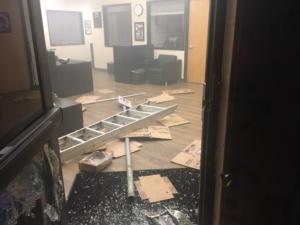 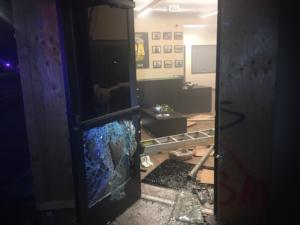 On Saturday, July 18, 2020, crowds of people gathered throughout Portland for various demonstrations. One group began at Peninsula Park and walked to the Portland Police Bureau's North Precinct blocking streets as they went. At around 8:35 p.m., hundreds gathered on the south side of the precinct in a parking lot. Some people tampered with gates, broke patrol vehicle windows, and vandalized patrol vehicles. People taunted officers as they arrived to work.

People in vehicles and on bikes blocked streets around the precinct. At around 9:27 p.m., Portland Police gave public address announcements directing people to leave to the west. The crowd made a two mile walk to the area of North Lombard Street and North Campbell Avenue where the Portland Police Association (PPA) offices are located at about 10:31 p.m.
Individuals began to break in the front doors of the PPA office while others blocked North Lombard Street with dumpsters which were soon lit on fire. Many in the crowd wore helmets and carried clubs and shields.

At about 10:45 p.m., people broke into the PPA office and within a few moments ignited a fire inside. As Portland Police arrived, many began to flee to the east. Portland Police declared a riot due to the violent conduct of the large group creating a grave risk of public alarm. Police issued public address announcements and moved the crowd east. As the crowd was dispersed, several people in the crowd were arrested and officers were able to extinguish the fire. Portland Police did not use any CS gas.

Groups scattered into the neighborhood. A large number of people regrouped near North Interstate Avenue and North Lombard Street. Portland Police Officers moved the crowd to the south on North Interstate Avenue. As they did, people in the crowd threw rocks, gopher gassers, and launched paint filled balloons at officers. Some officers were injured. By about 11:30 p.m., the crowd was broken into small groups and order was restored.

During this activity in north Portland, another large crowd was downtown near the Justice Center and Federal Courthouse. People tore down fences around Chapman Square Park and Lownsdale Square Park which had been put in place recently when the parks were closed for needed repair.

People also removed fencing around the Federal Courthouse and used it to barricade doors there. Others moved fencing in front of west and north doors to the Justice Center. Most of the crowd focused its energy around the Federal Courthouse. At some point federal law enforcement came out to address the crowd. The Portland Police were working in north Portland at the time.

People lit a bon fire in the ruins of the Elk statue base and other small garbage can or street fires. At times people gathered up on the east side of the Justice Center and blocked the gate to the jail and banged on the lobby doors. People remained downtown in and around Chapman Square Park and Lownsdale Square Park for several more hours.