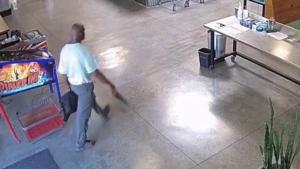 As officers responded to the area, several more 911 calls came in regarding this same suspect. 911-callers reported the suspect had assaulted several people with the handsaw and a belt, including two victims inside a laundromat, broke several vehicle's windshields, and threatened several more community members with the handsaw. A video of this incident can be found here: https://youtu.be/bjNYpk04w2w

The suspect walked in to the middle of traffic and continued to ignore multiple commands given by officers to drop the saw. As officers attempted to deescalate the suspect, he continued to yell at them and stated they were going to have to hurt him to get him to stop. While the suspect yelled at officers, he advanced toward them with the handsaw. Officers gave several more verbal warnings to the suspect.

The suspect continued his erratic behavior and officers used a less lethal munition at the suspect. The suspect threw the handsaw to the curb and officers once again began dialog with him in an effort to deescalate the situation. As officers spoke with the suspect, several bystanders interrupted their conversation with him by screaming and taunting the officers, only increasing his level of agitation again. Eventually, through calm conversation and active listening, officers were able to place the suspect in to custody safely.

"Officers frequently deescalate situations such as this," said Deputy Chief Chris Davis. "It is unfortunate that some community members chose to try to escalate the situation. These incidents seldom make the headlines, but illustrate the excellent training and restraint officers use to deescalate a person intent on forcing officers to use lethal force."