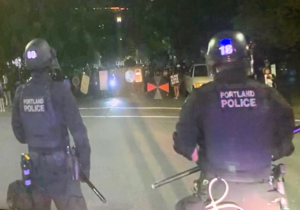 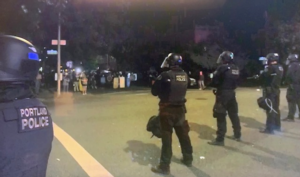 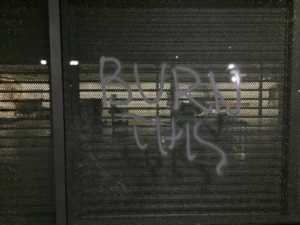 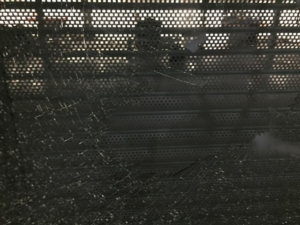 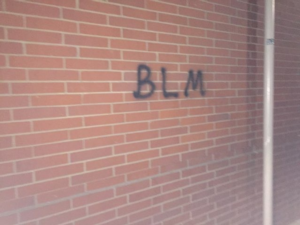 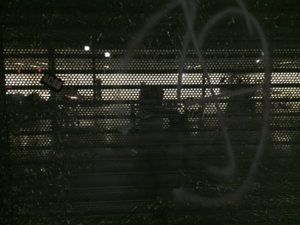 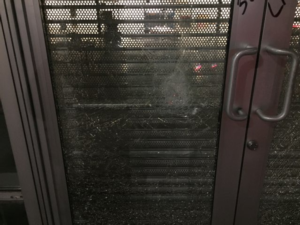 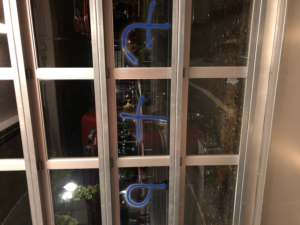 In the early morning of July 26, 2020 Portland Police made arrests downtown while dispersing crowds. The following is a list of their names and charges. Each was booked into the Multnomah County booking facility. A city of residence is listed next to names when arresting officers were able to determine one.

Updated with photos: Several photos are from damage sustained to the Nike business on MLK Boulevard when the crowd marched past. There is also an image of graffiti to Portland Fire & Rescue Fire Station 1. The other images are of one of PPB's RRT teams when they were dispersing the riot; several members of the crowd used shields, umbrellas and lights directed at officers.

On July 25, 2020 several large groups gathered around Portland, taking up city streets and demonstrating outside buildings.

A group walked through streets near NE 122nd Avenue and NE Halsey Street.

A group of about two hundred gathered outside the Portland Police Association offices in north Portland. They blocked N. Lombard Avenue for about an hour. They used cars and trucks to block adjacent streets. People from this group pulled sections of a chain link fence across N. Lombard Ave. Portland Police gave public address announcements to clear the street to allow traffic through. Because of the fencing and crowd blocking the street, Portland Fire & Rescue had to reroute emergency vehicles responding to a residential fire nearby. Slowly this group broke up and walked out of the neighborhood.

The largest group gathered on SW 3rd Avenue outside the federal courthouse and the Justice Center and the nearby parks and streets. There were thousands gathered. Throughout the night some people in this crowd spent their time shaking the fence around the building, throwing rocks, bottles, and assorted debris over the fence, shining lasers through the fence, firing explosive fireworks into the area blocked by the fence, and using power tools to try to cut through the fence. People wore gas masks, carried shields, hockey sticks, leaf blowers, flags, and umbrellas specifically to thwart police in crowd dispersal or attempt to conceal criminal acts. People against the fence sprayed unknown liquids through it toward the courthouse. People tied rope to the fence and attempted to pull it down.

This activity continued as thousands remained outside along SW 3rd Avenue for hours.
At about 1:03 a.m. people in the crowd attached a chain to the fence and with many people pulling managed to pull a section of it down. People began lighting fires along SW 3rd Avenue. People climbed over the fence to get close to the federal courthouse. People continued to launch mortar style fireworks at ground level that were exploding near others.

At about 1:20 a.m. dozens of people in the crowd maintained this level of violence and tumultuous conduct and were either intentionally or recklessly creating a grave risk of public alarm. Portland Police gave public address announcements directing everyone to leave to the west, closing the area bounded by SW 1st Avenue and SW Broadway to SW Columbia Street to SW Harvey Milk Street. Portland Police declared a riot based on the conduct of people in the crowd and gave repeated warnings that anyone who remained may be subject to arrest or citation and may be subject to force including impact weapons or tear gas.

Portland Police disengaged from the crowds at about 2:25 a.m. to see if people would keep leaving the closed area. Over the next hour, the groups mostly dissipated. Several arrests were made during the dispersal. This release will be updated as information becomes available. 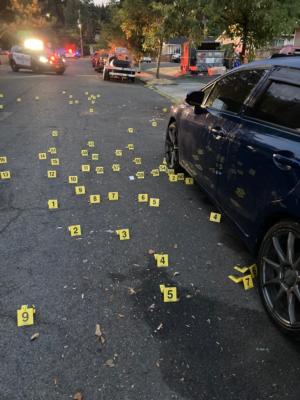