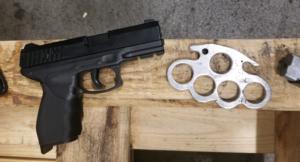 The investigators determined the gun, while it looked real, was a pellet gun. The case has been referred to the prosecutor for a determination of charges. The suspect, a 15-year-old male, was released to a parent's custody.

On Monday, August 3, 2020 at about 10:00p.m., Portland Police received a report of a suspect pointing a handgun at people in the area of Southwest 4th Avenue and Southwest Taylor Street. Oregon State Police were in the area and attempted to arrest the suspect. A hostile crowd surrounded the law enforcement officers, so they requested help from the nearest crowd control unit. Oregon State Police Mobile Response Team (MRT) responded and secured the area to allow the investigators to safely make the arrest. As soon as the suspect was transported away from the scene, the MRT began to disengage. Objects were thrown at the MRT members, including one glass object that struck a Trooper in the head and shattered. Munitions were deployed to defend the retreating MRT unit. Three Troopers suffered minor injuries during the event.

A suspect, a juvenile male, was detained and a realistic looking replica firearm, metal knuckles, and a knife were seized as evidence (photos). The investigation is continuing.