Update: Arrests of Individuals Involved in Criminal Activity the Evening of August 5 (Photo) 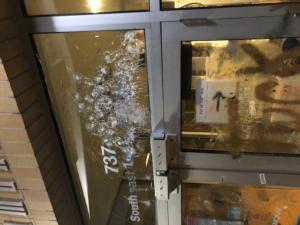 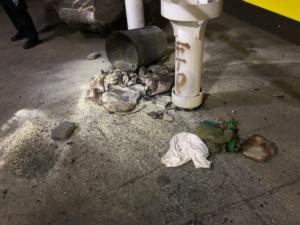 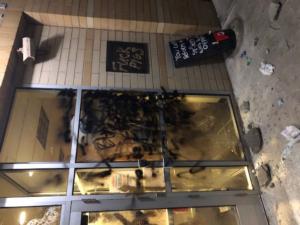 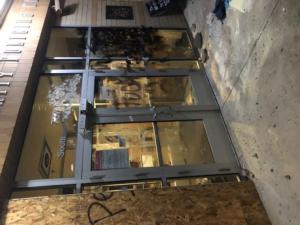 28 year-old Kiley Delgado of Hillsboro, OR, charged with Riot, Interfering with a Police Officer

39 year-old Michael Elias of Portland, OR, charged with Disorderly Conduct II, Interfering with a Police Officer

The link below is a short video of some of the destruction brought upon East Precinct last night. The images were collected by members of the Portland Police Bureau.

On August 5, 2020, two events took place in Portland. One group downtown blocked traffic for several hours on Southwest 3rd Avenue at Southwest Main Street. The gathering was mostly peaceful and PPB did not interact with the crowd.

At 9:33 p.m., Portland Police began making public address announcements, informing the crowd that criminal activity was occurring and if those in the crowd were there to peacefully protest, they needed to vacate the area immediately. The announcements were given several times, however, members in the group continued to tamper with the front doors of East Precinct. By 9:40 p.m., people began tearing off the boards that were protecting the glass windows of East Precinct. Several people in the group began to ram a large 2 by 4 piece of wood in to the front glass doors in an effort to shatter them. Other members of the group slammed different heavy large objects into the glass doors as well. The objects included large rocks.

Due to the ongoing criminal behavior, an unlawful assembly was declared at 9:45 p.m. Portland Police once again made public address announcements, telling the group to leave the area to the south. Most of the group continued to stay on Southeast 106th Avenue. By 9:50 p.m., those who had been destructing the East Precinct glass doors successfully cracked them, causing significant damage. Since serious ongoing criminal behavior continued, a riot was declared at 9:56 p.m. At 10 p.m., the front doors of East Precinct were barricaded and a fire was started using plywood and an accelerant.

At 10:06 p.m., officers began to disperse the crowd. While dispersing the crowd, officers were hit with projectiles and commercial grade fireworks. Because of life safety issues created by members in the group, CS gas and crowd control munitions were used. While dispersing efforts continued, a truck associated with the group attempted to run over several officers.

An unknown suspicious device was left outside of East Precinct by members of the group prior to the dispersal. The area was secured once the group was cleared from the area and the device was later found not to be an explosive.

At 11:19 p.m., most of the group had moved back westbound on Southeast Stark Street towards East Precinct. Officers once again dispersed the crowd and public address announcements were made to the crowd reminding them a riot had been declared and they were to leave the area. As officers dispersed the crowd, several balloons full of paint were thrown at officers.

Over the course of the next two hours, the group continued to return to the area of East Precinct and officers had to disperse the group two more times.

Several arrests were made during the event outside of East Precinct, information on arrests will be provided as it becomes available.