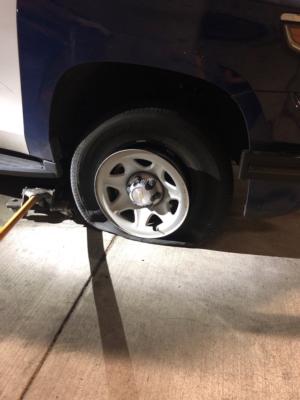 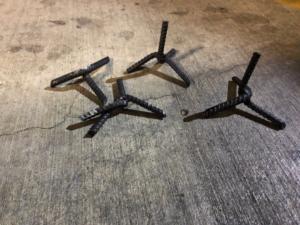 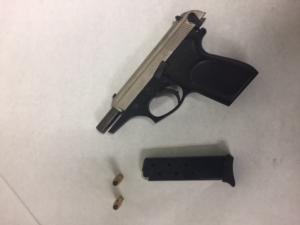 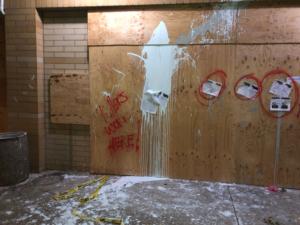 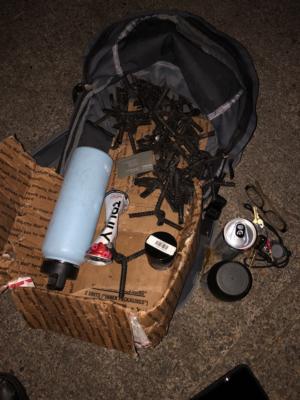 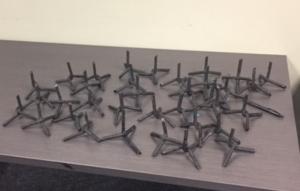 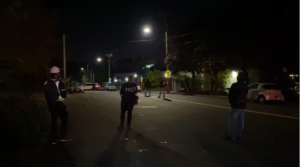 Correction: The following adult was also arrested and was inadvertently left off the original release:
31 year-old Roberto Echavarria of Portland, OR, charged with Interfering with a Police Officer and Disorderly Conduct II

A 17 year-old male detained for Interfering with Police Officer was referred to the Juvenile Court and released to a parent.

The photograph of the backpack attached to this release was from Malia Treammell. Treammell used a device to puncture a tire on the sound truck that was providing direction and orders to the crowd. An officer told her she was under arrest and grabbed onto her backpack to affect the arrest. She slipped out of the backpack and fled on foot. Officers chased her and she fell while trying to turn a corner. She was arrested and officers located multiple rebar spike devices in the backpack.

Other images of individuals with markings purporting to be "press" who violated the area closure.

Due to the crowds ongoing criminal behavior of vandalizing East Precinct and harassing community members, an unlawful assembly was declared at 9:53 p.m. Public address announcements were made, telling the group they needed to move to the north. Although these announcements were made, the majority of the crowd stayed at the location. At 10 p.m., the group outside of East Precinct lit a garbage can on fire and pushed it up against the front of the building. Several thank-you notes on blue hearts from community members which were affixed to the front of East Precinct were used as an accelerant for the garbage can fire. An elderly community member came forward in an attempt to extinguish the fire. As she did this, group members stood in her way. As the group attempted to keep the fire ignited, several others in the group shined lasers at the security cameras affixed to East Precinct and continued tagging the building with graffiti. Shortly after, PPB with the help of OSP began dispersing the crowd.

As officers dispersed the crowd, they were hit with projectiles ranging from glass bottles to heavy rocks. Large rebar ties were thrown into the street with the intention of popping police vehicle tires. Several police vehicles ran over these ties which caused damage to tires. While officers dispersed the crowd, several custodies were taken. After the initial push, the group headed back towards East Precinct even though several public address announcements continued to be made telling the group to leave the area. As the group headed towards East Precinct, they were dispersed to the west and past East Precinct. The group continued to walk back towards the precinct and once again were dispersed. During these dispersals, officers continued to take projectiles such as paint, rocks, and commercial grade fireworks.

Throughout the night, several people in the crowd with "press" affixed to their persons taunted officers. These people shined lights and lasers in officer's eyes, as well as threw eggs and rocks at officers. Some of these people continued to interfere with officers as they dispersed the crowds. Around 12 a.m., more than 100 members of the group returned to the area of Southeast 106th Avenue and Southeast Washington Street. An officer was severely hurt when a large rock was thrown at one of their shoulders. Since several people with "press" affixed to them continued to interfere with officers performing their lawful duties, a public address announcement was made which closed Southeast 106th Avenue from Southeast Washington Street to Southeast Cherry Blossom Street to all people including members of the press. This lawful order was under the authority of city code 14C.30.010 titled "authority to restrict access to certain areas". Despite the multiple public address announcements which stated press could no longer be in the area, a majority of the group continued to violate the closure order. The group was given ample time to leave the closed area. The members of the group who continued to stay in the area were dispersed once again by officers.

Several arrests were made during the event outside of East Precinct, including an individual who had a loaded handgun on their person. Information on arrests will be provided as it becomes available. Crowd control munitions were used during dispersals. The PPB did not deploy CS gas.