Update: PPB Needs Help From In-Person Witnesses in Regard to Explosive Device (Photo) 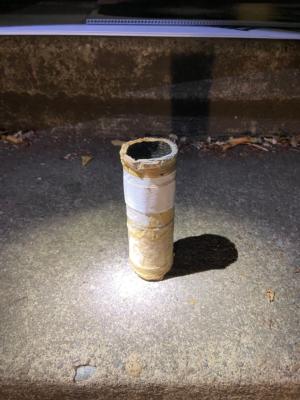 The FBI is assisting with the investigation.

PPB has received the "unexploded device," and it will be sent for forensic analysis.


PPB has reviewed social media reports and videos involving the explosive device from Laurelhurst Park on August 8, 2020. PPB Investigators have received multiple emails demanding action in this case and they are working hard to get answers. As of today, no in-person witness, someone who was actually there, has come forward to assist in the investigation.

Anyone who has information about the incident is asked to call the non-emergency line at 503-823-3333.

The Portland Police Bureau is still investigating the report of possible explosive devices thrown at protesters on Saturday in Laurelhurst Park. The photos included in the press release were posted by whatriot.com. PPB is not in possession of the potential evidence and is looking to collect it. Anyone with information, please contact Detective Meredith Hopper at 503-823-3408, meredith.hopper@portlandoregon.gov . In addition to collecting evidence, we are seeking to interview anyone who was a direct eyewitness, and anyone who has first-hand video of the incidents.

The Portland Police Bureau is investigating reports that a person or persons threw explosive devices at protestors in the early morning hours of Saturday August 8, 2020.

At 2:28 a.m., officers responded to a 9-1-1 call at Laurelhurst Park on the report of a disturbance and "bombs" going off. Officers arrived in the area and spoke to some witnesses along the Stark Street side of the park, but the witnesses did not report hearing anything. Other officers observed people in the park who were shining lights at the police before scattering out of the area.

Several hours later, social media users posted photos (see attached) and videos of what appears to be some kind of explosive device and an explosion in the park. There has been no information shared about any reported injuries.

Arson investigators would like to hear from anyone who personally witnessed this incident, anyone with specific suspect information, or any additional video or images that might aid in the investigation. Additionally, if anyone took the remnants or unexploded material from the scene, investigators would like to recover those items for evidentiary purposes. Anyone with information should contact Detective Meredith Hopper at 503-823-3408, meredith.hopper@portlandoregon.gov .

For persons wishing to remain anonymous, tips may be submitted safely and securely to Crime Stoppers of Oregon online at http://crimestoppersoforegon.com/ or by phone at 503-823-HELP (4357).

Crime Stoppers of Oregon offers cash rewards of up to $2,500 for information, reported to Crime Stoppers, that leads to an arrest in any unsolved felony crime and tipsters can remain anonymous.

Visit the App Store and download P3 Tips to submit secure and anonymous tips from your smart phone.