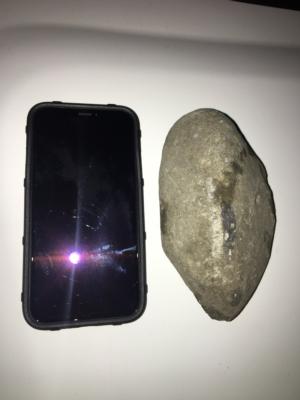 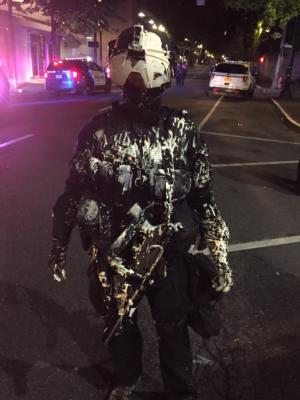 Officers arrested two people during the riot that took place downtown. Both were booked into the Multnomah County Detention Center on the listed charges:

On August 12, 2020, a group of several hundred people gathered in Chapman Square and Lownsdale Square Park in downtown Portland. Beginning at 8:30 p.m., the group blocked traffic for several hours on Southwest 3rd Avenue at Southwest Main Street. During this time, several people made speeches while others chanted.

Around 10:30 p.m., members of the group threw an unknown foreign substance towards the front doors of Central Precinct located on Southwest 2nd Avenue. Meanwhile, other members of the group began launching commercial grade fireworks towards the fence protecting the Hatfield Federal Courthouse on Southwest 3rd Avenue as well as ignited a fire outside of the building. Most of these people were seen wearing helmets, gas masks, and carrying shields and batons. Because of the criminal behavior occurring, public address announcements were made telling the group to stop launching fireworks and starting fires at the Federal Courthouse. As the PPB sound truck made this announcement, several people shined green lasers at the officer's eyes who were inside the sound truck. This action can cause permanent damage.

After the public address announcements, the majority of the group moved to Southwest 2nd Avenue outside of Central Precinct and blocked traffic. Although several warnings were given to the group regarding ongoing criminal behavior, the criminal acts continued. Because of this, at 11:32 p.m., an unlawful assembly was declared. Public address announcements were made telling the group an unlawful assembly had been declared and to disperse to the north and west. The group was told if they did not disperse, they would be subjected to citation or arrest, or subjected to the use of tear gas, crowd control agents, and or impact weapons. After several announcements were made, most of the group continued to stand in the street and a fire was started outside of the Central Precinct doors. At this time, both Oregon State Police and Portland Police began dispersing the crowd to the north.

As the crowd was dispersed to the north, a large explosive and other fireworks were thrown towards officers, along with fist sized rocks, bottles, and cans of paint. Some custodies were made. During the dispersal, one officer's hand was severely hurt and several others sustained minor injuries. Because of the life safety issues created by criminal actions within the group, a riot was declared at 11:59 p.m.

Although a riot had been declared, the group began to move back south towards the Justice Center. As the group approached the Justice Center, they threw eggs and continued to launch commercial grade fireworks towards officers. Throwing incendiary devices towards people creates an extreme life safety issue. The crowd was again dispersed to the west. As the crowd was dispersed, both CS gas and crowd control munitions were used. Several more custodies were made.

Several arrests were made over the course of the event. Information on arrests will be provided as it becomes available.