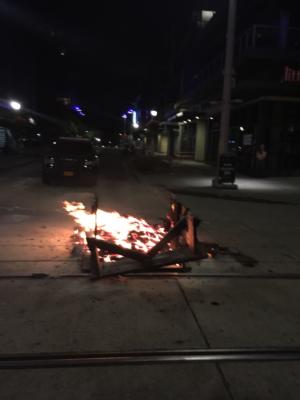 In the evening hours of August 19, 2020, a group of a couple hundred people gathered in Elizabeth Caruthers Park located on the 3500 block of South Moody Avenue for a march that began around 9:15 p.m. The march proceeded south to the 4300 block of South Macadam Avenue which is where the Immigration and Customs Enforcement (ICE) building is located. During the march, streets were blocked to vehicular traffic by support vehicles associated with the group.

Because the crowd blocked traffic, shined lasers at Federal officers, and vandalized property, at 10:07 p.m., the gathering was declared an unlawful assembly. Several public address announcements were made to the crowd informing them an unlawful assembly had been declared and that they needed to disperse to the north. The crowd was informed that if they failed to disperse it could result in citation or arrest. Those group members who did not disperse would also be subjected to tear gas, crowd control munitions, or impact weapons. Despite several warnings, the crowd remained outside of the ICE Building.

At 10:18 p.m., Portland Police officers began to disperse the crowd, as officers dispersed the crowd, glass bottles and rocks were thrown at them. Lots of people in the crowd carrying shields used the shields to resist officers' efforts to disperse the crowd to the north. By 10:37 p.m., the crowd returned to the ICE building, despite the repeated public address announcements regarding the unlawful assembly. Some people in the group began setting up barricades in surrounding streets and even moved a dumpster towards the ICE building. In the past, dumpsters have been lit on fire and moved next to targeted buildings, in an attempt to set structural fires. Federal officers exited the ICE building and members of the group began throwing large rocks as well as glass bottles at them. The large rocks were described to be the size of softballs. At 10:49 p.m., Portland police once again began to disperse the crowd, as the crowd was dispersed, officers were hit with these large rocks. Officers were also hit with full cans of soda, and a hammer. Because of the risk to life safety caused by these dangerous projectiles, the gathering was declared a riot.

Several public address announcements were made to the crowd, informing them a riot had been declared and they needed to disperse immediately to the north. The crowd was informed that if they failed to disperse it could result in citation or arrest. Those group members who did not disperse would also be subjected to tear gas, crowd control munitions, or impact weapons. As officers continued to disperse the crowd to the north, a cone was thrown at an officer.
Once the group was at South Gaines Street and South Bond Avenue, the group set a mattress on fire in the middle of the intersection. At 11:30 p.m., a picnic table from a nearby business was moved onto the fire, which generated an even larger fire. While the fire was burning, group members blocked the intersection and chanted loudly. At 11:39 p.m., a majority of the group left the area and marched back south towards the ICE building. When the group arrived at the ICE building, people began breaking windows to the building.

Once again, public address announcements were made to the crowd, informing them the gathering was still declared a riot and that they needed to disperse to the north. After several announcements, most of the group remained blocking the street and engaged in criminal behavior. Portland police once again began to disperse the group to the north. As the group was dispersed, officers were hit with more large rocks and water bottles. During the dispersal, some custodies were made.

A small group returned outside of the ICE building, however, the group mostly dispersed by 1:30 a.m.

Officers sustained some minor injuries due to the rocks thrown at them. Crowd control munitions and CS gas were used during dispersals.