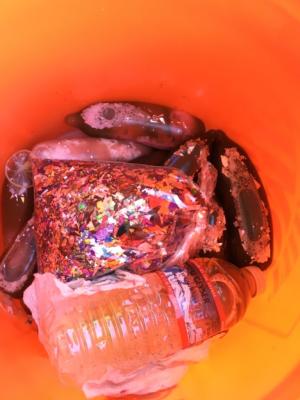 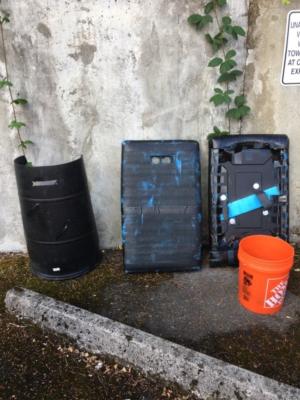 On Saturday, August 22, 2020 several different groups gathered in Downtown Portland around noon. There were a variety of groups with various ideologies represented and several hundred individuals filled the streets and nearby park. Some of the groups converged on Southwest 3rd Avenue on the West side of the Justice Center.

PPB continues to have a goal of prioritizing life safety while balancing the First Amendment rights to free speech and assembly regardless of the opinions expressed.

Hundreds of people gathered in the street on the Southwest 3rd Avenue side of the Justice Center and in the park across the street. PPB's sound truck provided announcements asking for the groups to separate and move to the sidewalks and also to self-monitor for criminal activity.

Officers located a bucket containing condoms filled with an unknown liquid substance and a water bottle with what appeared to be urine along with several shields staged near the park at Southwest 4th Avenue and Salmon. These items were confiscated.(PHOTOS)

Over the course of the next two hours, the groups remained in the streets. Individuals yelled at each other and there were some physical interactions which quickly resolved themselves. Some members from both groups threw projectiles and deployed aerosols like pepper and bear spray at each other. At times, fireworks were thrown and smoke canisters were deployed. Each skirmish appeared to involve willing participants and the events were not enduring in time, so officers were not deployed to intervene.

PPB monitored the situation and continuously provided direction via social media and the sound truck warning the group members to not engage in criminal acts and to self-monitor.

While these events were happening downtown, there was a call at 12:29p.m. of a disturbance in East Portland with what was reportedly a male who assaulted his mother with a saber. This call pulled multiple police resources while it was resolved. Ultimately, it was determined the male had a "shaver" not a "saber" as had been reported via dispatch and the male was safely arrested.

At one point during this call, there were only 4 available police cars in the entire City to respond to emergency calls for service. PPB had limited resources available today for the events and many of those working had worked until the early morning hours as a result of the overnight riot.

There have been questions about why the events downtown were not declared a riot and why police did not intervene. Incident commanders have to weigh out the entire situation to determine if police action is likely to make things safer or not. In this case there were hundreds of individuals and many weapons within the groups and an extremely limited amount of police resources actually available to address such a crowd. Additionally, PPB members have been the focus of over 80 days of violent actions directed at the police, which is a major consideration for determining if police resources are necessary to interject between two groups with individuals who appear to be willingly engaging in physical confrontations for short durations.

While the activity in the group met the definition of a riot, PPB did not declare one because there were not adequate police resources available to address such a declaration. PPB had roughly 30 officers available for crowd management and there were several hundred individuals associated with the events downtown.

Before 3 p.m. one group left and members of the other group followed them for awhile, but then separated and regrouped and returned to the area of Terry Schrunk Plaza. Federal officials declared an unlawful assembly in the park and directed the crowd to the North.
The remaining members of the crowd regrouped near the Edith Green Federal Building.

PPB learned through media reporting about a social media post involving a male subject who appears to point a firearm at the crowd sometime during today's events. The video is located here and posted by @MrOlmos on Twitter: https://twitter.com/MrOlmos/status/1297273640052912128?s=20

PPB has identified the involved male suspect in this incident and is looking for further information from the public. PPB is investigating the matter and asks that anyone who was a victim or in-person witness with video or a personal account to contact PPB Detective Jones at Michael.jones@portlandoregon.gov

"Crowd management events are complex, especially when they involve groups with differing ideologies with members who wish to engage in physical confrontations," said Chief Chuck Lovell. "PPB had to be judicious with our limited resources today especially since many of our members worked during the riot this morning and had very little sleep. Our resources are finite and we also have emergency calls for service to manage across the City. We are investigating criminal acts when we are aware of them and ask for any victims to come forward so we can build the best case we can for enhanced outcomes for prosecution."