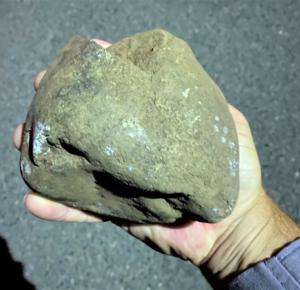 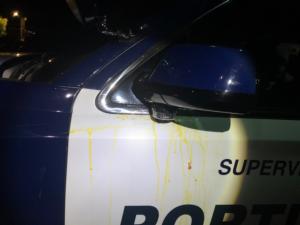 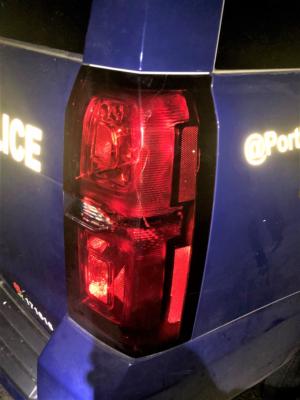 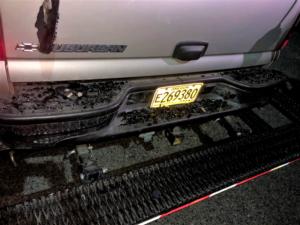 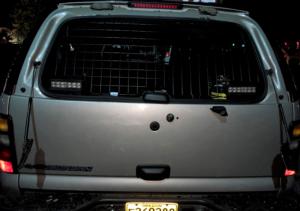 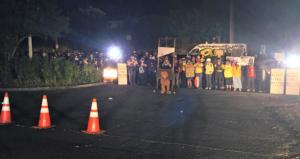 Rocks and bottles were thrown, paintball guns fired, and lasers targeted officers during a riot Saturday night into Sunday morning.

On August 22,, 2020, a group of about 250 people gathered at Normandale Park at Northeast 57th Avenue and Northeast Halsey Street. At about 9:15p.m, the gathering proceeded to march to the south. Many participants in the march carried hardened shields, helmets, armor, gas masks, and wore all black clothing. At least one participant targeted the Portland Police Air Support Unit airplane with a green laser. This is extremely dangerous and could cause disorientation for the pilot, in addition to permanent eye damage.

It was apparent that the march intended to proceed to the Penumbra Kelly Building at 4735 East Burnside Street. That has been the target of rioters on multiple occasions over the past few months, including assaults on officers, commercial grade fireworks detonated, fires set, threats to burn down the building, and vandalism. That recent history, coupled with the posture of the crowd, prompted the Incident Commander to prevent the marchers access to the Kelly Building.

Portland police officers were stationed ahead of the march and prevented the participants from crossing over Interstate 84. As officers were getting set up on the Northeast 47th Avenue overpass, four vehicles approached the officers and refused orders to move. The officers had to set up their line right in front of the cars. So to prevent the danger presented by the vehicles, a sergeant deflated two tires on one of the vehicles. The other vehicles then complied with orders to leave.

At Northeast 47th Avenue, the Portland Police Bureau (PPB) sound truck announced over loudspeaker to the marchers that the overpass was closed. They were told that they should move off the overpass and travel east. Failure to adhere to this direction may subject them to citation, arrest, and/or crowd control agents, including but not limited to tear gas and/or impact weapons.

Individuals in the crowd threw rocks, eggs, and glass bottles in the direction of the officers. There were no injuries. The sound truck was also targeted by individuals. It was struck by eggs and rocks.

The crowd turned around, proceeded back to Normandale Park, and dispersed.

A short time later, a gathering developed at the Kelly Building. By 10:45p.m., a crowd had gathered on East Burnside Street blocking vehicular traffic. The PPB sound truck broadcast warnings via loudspeaker that marchers were not to enter or remain on the Kelly Building property. Failure to adhere to this direction may subject them to citation, arrest, and/or crowd control agents, including but not limited to tear gas and/or impact weapons.

Officers stayed back a significant distance in the parking lot in an attempt to deescalate the situation.

Someone rolled a mock guillotine with a stuffed bear into the street (photo). The bear and multiple U.S. flags were burned. Paint balloons were launched at officers, as well as green lasers.

The sound truck asked the group to stay peaceful or it would be declared an unlawful assembly. Almost immediately eggs and paintballs landed in the area of the officers. Due to this criminal behavior, the gathering at the Penumbra Kelly Building was declared an unlawful assembly at 11:41p.m. All persons were told to immediately leave to the west. Failure to leave to the west may subject them to arrest, citation, or crowd control agents, including but not limited to tear gas and/or impact weapons. Few, if any, heeded the warning.

At 11:45p.m., officers began to push the crowd to the west. Rocks, bottles, and other hard objects were thrown at officers. One lieutenant was struck in back of head with a glass bottle. His helmet prevented him from being injured. A Portland Fire and Rescue Medic embedded with one of the squads was hit in the shin with a large rock (photo). He suffered a minor laceration to the leg.

At 11:59p.m., due to the life safety danger, a riot was declared. More warnings were issued from the PPB sound truck. The sound truck was struck and damaged by rocks and eggs (photos). The rear window of a vehicle used to transport a Rapid Response Team squad was shattered (photo) by a rock. Numerous officers reported seeing individuals bearing "press" insignia throwing rocks at them.

The officers disengaged. However, several dozen rioters walked back to the Kelly Building. Sound truck and social media warnings continued to advise that returning may subject them to arrest, citation, or crowd control agents, including but not limited to tear gas and/or impact weapons. After giving the group time to leave, officers moved in to make arrests about 12:35a.m.

Officers initiated another push, attempting to convince the group to leave. This time, they went south on Southeast 47th Avenue to Southeast Stark Street. Officers disengaged again. Protesters lit traffic barricades, mattresses, a door, and other debris on fire in the intersection (photo courtesy @infopig).

Between 45 and 50 officers had to be pulled from precincts to assist in the protest response. For most of the duration of this event, there were between 120 and 140 calls holding in the City of Portland. Calls included shots fired, assaults, alarms, threats, and suspicious circumstances.

Crowd control munitions were used during this event, however no CS gas was deployed.

Fourteen arrests were made. All were booked into the Multnomah County Detention Center on the listed charges:

Healy, Kimberly, 42, of Portland, Interfering with a Peace Officer, Disorderly Conduct in the Second Degree

Warner, Josh, 25, of Portland, Interfering with a Peace Officer, Disorderly Conduct in the Second Degree

McMurtry, Daniel, 38, of Portland, Interfering with a Peace Officer, Disorderly Conduct in the Second Degree

Johnson, Alice, 27, of Portland, Interfering with a Peace Officer

Cox, Bradly, 38, of Portland, Interfering with a Peace Officer

Tolman, Andrew, 30, of Portland, Interfering with a Peace Officer

Bramble, Reid, 42, of Portland, Interfering with a Peace Officer

Leafwalker, Daniel, 46, of Portland, Criminal Trespass in the Second Degree