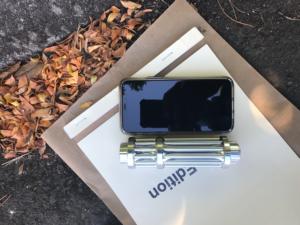 On September 3, 2020, Portland Police Bureau detectives arrested 36 year old Bryan Michael Kelley, and served a search warrant at his residence, during an investigation into criminal activity he was alleged to be involved in near City Hall, last week.

During the evening of August 25, 2020, a group of people gathered in Shemanski Park, in downtown Portland, and walked to City Hall. Within minutes of arriving, people within the group began committing crimes in and around City Hall.

Among those in the crowd that night was Mr. Kelley. Members of the Portland Police Bureau Rapid Response Team (RRT) responded to City Hall to restore order. At least one member of RRT realized that Mr. Kelley had repeatedly directed a laser into the RRT member's eyes, causing injury. Eventually, members of RRT were able to locate and arrest Mr. Kelley near Southwest 4th Avenue and Southwest Jefferson Street. He was found to be in possession of a laser (photo). Detectives later tested the laser by pointing it at a piece of cardboard, which caused the cardboard to burn. Such lasers can be purchased online and are usually accompanied by warnings about harm they can cause, especially to the eyes. https://youtu.be/dcR_xkpOuNQ

Mr. Kelley was taken to jail that night for Unlawful directing of light from a laser pointer, Disorderly Conduct II, and Interfering with a Peace Officer.

Detectives followed up on this case, and wrote search and arrest warrants, which were reviewed and signed by a judge. This morning, Portland Police Bureau detectives served those warrants and arrested Mr. Kelley for
* Assault II, Class B felony -- Measure 11
* Unlawful Use of a Weapon, Class C felony;
* Unlawful directing of light from a laser pointer, Class A misdemeanor.

Chief Chuck Lovell said, "An assault on the police is an assault on the community we are sworn to protect. I commend the officers out there every day and night, and detectives whose follow up makes arrests like this possible. Anyone hiding behind legitimate protests to commit acts of violence should know the investigations keep going even if you get released after your initial arrest."

The Portland Police Bureau continues to follow up on crimes committed during violence which has occurred nightly throughout the city for over 95 days.