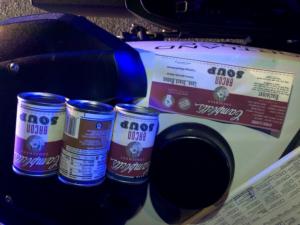 In the evening hours of September 29, 2020, a group gathered outside of the Penumbra Kelly Building in the 4700 block of Southeast Burnside Street.

A vehicle associated with the group was creating a hazard in the eastbound lanes of East Burnside Street just west of Southeast 47th Avenue. Officers approached the vehicle and as they did so they located several soup cans on top of the vehicle that appeared as though they had been made to throw at officers (photo). Inside the vehicle were several items consistent with what crowd members have used during previous unlawful assemblies and riots. These items included shields, helmets, gas masks, CO2 cans, and paintball guns (photo). Officers asked the owner of the vehicle to move it so it did not create a traffic hazard. The owner refused to move the vehicle, therefore it was cited and towed.

A second vehicle associated with the group was stopped for a traffic violation. As officers conducted the traffic stop they learned the driver was uninsured. Inside the vehicle were several more items consistent with what crowd members have used during previous unlawful assemblies and riots (photo). The vehicle was towed for no insurance.

The group continued to gather outside of the Kelly Building for several hours and was told over loudspeaker not to enter the property, if they entered the property, they would be trespassing and subject to citation or arrest. Despite the warning, several people in the group entered the property. Targeted arrests were made by officers.

The crowd was mostly dispersed by 1 a.m. No crowd control munitions were used.

During the gathering, 2 Juveniles were detained and released and the following adult was arrested and booked into Multnomah County Detention Center:
*Cervantes, Preston, 20-year-old, from Tualatin, Oregon, Interfering with a Peace Officer, Disorderly Conduct II, Trespass II, Escape III