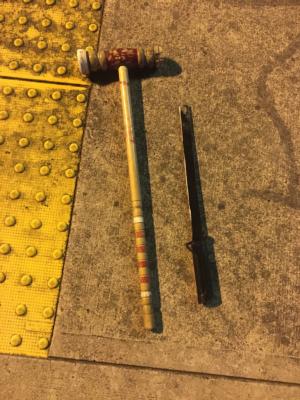 On October 19, 2020, at 7:31 p.m., Portland Police Bureau officers from East Precinct responded to the 3500 block of Southeast 122nd Ave on an assault call. Officer arrived and found an adult male victim who had been attacked by two male suspects, who were armed with a mallet and steel bar.

The victim notified a security guard who was in the area that two males were harassing people in the area. The victim continued on his way but the two males began to harass him as he was trying to leave. The two males then began to assault the man, who was not fighting back.

Two security guards in the area witnessed the assault and ran over to assist the victim. They were able to safely intervene and keep the suspects there until police arrived.

The victim was hit on the front and back of the head several times with both the wooden mallet and steel bar. The victim was transported to an area hospital with significant, but non-life-threatening injuries.

Anyone with information about this incident is asked to call Detective Christensen at 503-823-2087 or email Brent.Christensen@portlandoregon.gov.